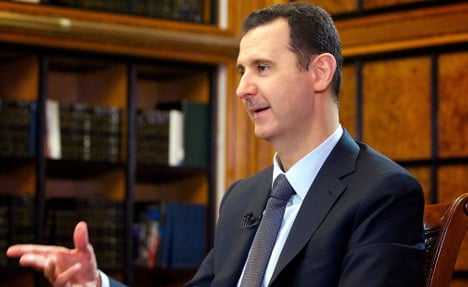 A question from the Left Party to the government showed that the chemicals were exported to Syria from 2002 to 2006, the Süddeutsche newspaper reported on Wednesday. The chemicals were supposed to be used to make toothpaste but were also capable of building weapons.

Syrian President Bashar Al-Assad has been accused by the West and UN of carrying out a chemical weapons attack on his people in the capital of Damascus on August 21 in which hundreds were killed.

The chemicals sold have a dual use – they can be used for both military and non-military purposes. They include hydrogen fluoride, ammonium hydrogen fluoride and sodium cyanide. The export of the chemicals is restricted but not illegal, the Süddeutsche newspaper reported, as they are used in industry.

The deliveries were made during the SPD-Green government of Gerhard Schröder as well as under the grand coalition of the SPD and Chancellor Angela Merkel’s CDU.

President Al-Assad said in an interview on Wednesday that he would give away the country’s chemical weapons to whoever would take them. He told Fox News the destruction of the stockpile would take about a year.