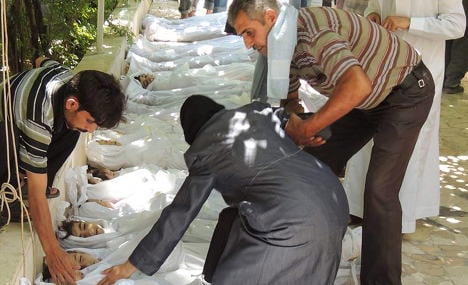 “The evidence suggested that the Assad regime is behind the breach,” Foreign Minister Guido Westerwelle told the Süddeutsche Zeitung newspaper.

Meticulous research from the UN inspectors “confirms our assumptions that only the Assad regime could have the equipment and abilities to carry out the poison gas attack that had had such horrifying consequences,” he said.

His comments align Germany with the US, France and the UK, who all said the UN report confirmed their beliefs that the Assad government was behind the attack on August 21st outside of the country’s capital, Damascus.

A report from NGO group Human Rights Watch presented a separate, 22-page report on the attacks shortly after the UN published their report on Monday. In it was further evidence linking Assad’s government to killing hundreds of civilians with Sarin gas.

Yet on Tuesday, Russia said it did not agree with Germany, America, France or the UK holding Assad to fault. Foreign Minister Sergei Lavrov said that the country had “serious grounds” linking the rebel forces to the attack.

The attack was, Lavrov said, another instance of “provocation” from the rebels to try and trigger foreign intervention in Syria, reported the Süddeutsche Zeitung.