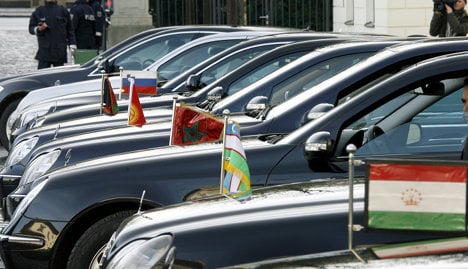 Between January and March of this year, foreign diplomats racked up €77,165 worth of fines, in 4,823 incidents. Eight of these were accidents, including six hit and runs, the Bild newspaper said.

But diplomatic immunity means the drivers are not prosecuted.

The number of incidents has gone down slightly since last year, but the amount of fines, which do not have to be paid, has gone up by over €2,000.

Saudi-Arabian diplomats were the worst offenders, followed by the Russians, Iran and China. USA was in sixth place – with 238 vehicles it also has the largest fleet of government cars. Britain, Australia and Canada did not make the top ten.

Iran only has 39 cars, yet managed to rank far higher than the US when it came to driving offences, the Bild reported. The newspaper gained access to figures after requesting information from the city’s interior minister.

City MP and interior expert Peter Trapp told the Bild: “Diplomats have to follow the rules too.” He added that he was calling for the foreign affairs office to send round a memo cautioning diplomats to respect traffic laws.