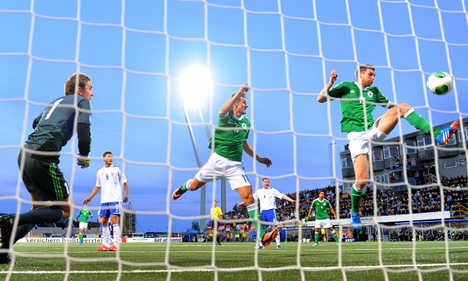 The Mannschaft stay five points clear at the top of Group C, but Sweden’s 1-0 win over Kazakhstan earlier in the day means that Germany still need two more points from their final two games to confirm automatic qualification.

A single first-half strike by Arsenal defender Per Mertesacker was all Germany had to show for 74 minutes of endeavour until his Gunners team-mate Mesut Özil netted a late penalty.

Bayern Munich’s Thomas Müller then added a third in the dying stages.

The hosts from the remote north-west Atlantic archipelago, ranked 175th in the world compared to the second-placed Germans, succumbed to their eighth straight defeat in the group, but produced some dogged resistance.

“It was a mandatory requirement to pick up three points here and it was the sort of game we had expected,” admitted Germany coach Joachim Löw. “They stood with 10 men in the penalty area, they are a team who know how to defend well.

“If there is anything to criticise, we have to work on our final touch.

“We didn’t move as well after the break as we had in the first half and we have to improve our game in the final third of the pitch.”

Löw’s Germany are not the first team to have laboured against the islanders of late.

Italy won only 1-0 here in a Euro 2012 qualifier, while Sweden needed a 75th-minute winner from Zlatan Ibrahimovic to seal a 2-1 away win last October in the same group.

Germany have now won all four of their matches against the Faroe Islands, who were only granted FIFA membership in 1988, but Löw’s side made hard work of the win on the artificial pitch at Torshavn’s Torsvollur stadium.

After going close in the first half, Germany’s chances dried up in the second half before the two late goals.

The Faroes got off to a bright start, threatening the German goal after just 40 seconds, but the hosts’ midfielder Suni Olsen hit his own crossbar at the other end moments later when clearing a cross from Germany’s Julian Draxler.

Miroslav Klose then hit the post just before his side took the lead when Mertesacker tapped home after his centre-back partner Jerome Boateng had headed on an Özil cross on 22 minutes.

The visitors doubled their lead 16 minutes from time as the hosts were reduced to 10 men when Faroes defender Atli Gregersen was sent off for the slightest of touches on Mueller before Özil drilled home the resulting spot-kick.

Müller then fired home on 84 minutes after finishing a pass from captain Philipp Lahm and Germany can now wrap up qualification against Ireland on October 11th before heading to Stockholm to face Sweden four days later in their final qualifier.