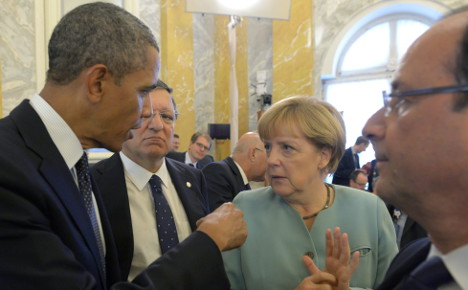 Germany was a notable absentee from a US-backed statement signed at the G20 in Saint Petersburg on Friday by 11 countries. It waited until Saturday to sign.

With the United States seeking to rally international support for military strikes on Syria in the wake of what it says was a deadly chemical attack by the regime on August 21, four EU countries signed the statement.

On Sunday Merkel criticized the timing of the statement and said she wanted to get all 28 EU members on board before signing.

“I don’t believe it’s right for five countries to agree on a united stance without the other 23 that can’t be there, knowing that 24 hours later all 28 will be gathering around the same table.” Merkel, who is seeking reelection in two weeks’ time, told a campaign rally in western Germany. “That’s why I said, ‘Let’s see to it that we have a united stance by all 28.'”

The remarks were a veiled criticism of Britain, France, Italy and Spain, the four EU countries that signed the G20 statement on Friday.

Neither the G20 statement nor the EU statement – issued after a meeting attended by US Secretary of State John Kerry – called for military intervention.

The EU statement called the August 21 attack outside Damascus “a war crime and a crime against humanity” and said there was “strong evidence that the Syrian regime is responsible”.

“The international community cannot remain idle,” it added. “A clear and strong response is critical to make clear that such crimes are unacceptable and that there can be no impunity.”