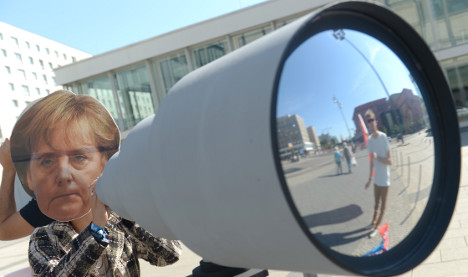 Organisers, among them the opposition Greens, The Left and Pirates parties, said 20,000 people turned out. Police would not confirm the figure, saying only their “tally differs from that of the organisers”.

The protest was organised under the slogan “Freedom Rather Than Fear” and demonstrators carried banners saying: “Stop spying on us” and, more sarcastically: “Thanks to PRISM (the US government’s vast data collection programs) the government finally knows what the people want”.

“Intelligence agencies like the NSA shamelessly spy on telephone conversations and Internet connections worldwide (and) our government, one of whose key roles is the protection from harm, sends off soothing explanations,” said one speaker, Kai-Uwe Steffens.

On Thursday, newly leaked documents alleged that US and British intelligence agencies have cracked the encryption that secures a wide range of online communications — including emails, banking transactions and phone conversations.

The documents provided by former US intelligence contractor Edward Snowden

to The New York Times, ProPublica and The Guardian suggest that the spy agencies are able to decipher data even with the supposedly secure encryption designed to make it private.