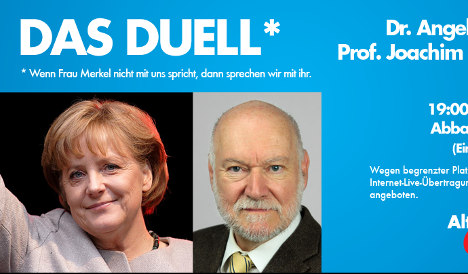 Securing a debate with Merkel would have been a major coup for the recently-formed party, which is polling around three percent of the vote ahead of the election on September 22nd.

But the posters were just a spoof – coming in the wake of a real televised debate between Merkel and her main challenger Peer Steinbrück on Sunday night watched by more than 17 million Germans.

Yet not everyone got the memo about the joke, and several party members rushed to book flights to Berlin to make sure they did not miss their man take on Merkel.

One party member complained: “I want to know who in our leadership had this “idea”. It has caused me some difficulties. I have cancelled important appointments and a flight to Munich,” Handelsblatt newspaper reported.

The Berlin branch was forced to post an apology on Facebook, the paper said. “We did not think that flights would be booked to attend the debate. We are very sorry,” wrote party officials, adding that they nevertheless believed it was a legitimate tactic for a small party to get attention.

In an apology to another supporter they wrote: “Mrs Merkel will not be there in person. There will however be a debate.”

Other AfD members were more supportive of the party. One wrote on Facebook: “I think it’s a great idea and I’m sorry but whoever believes that Merkel and Starbatty are going to hold a live debate, is a bit naive.”

Another said: “I didn’t fall for this for a second. Whoever believed that Merkel would debate with the AfD also believes in Father Christmas,” the Handelsblatt reported.

As well as the Berlin branch apologizing, party HQ was forced to clarify that there would be no duel with Merkel, admitting: “She [Merkel] knows nothing of the debate.” They said it had been the idea of their campaign team and press department.

Starbatty, an economist from the university town of Tübingen, advises the party on economic issues.