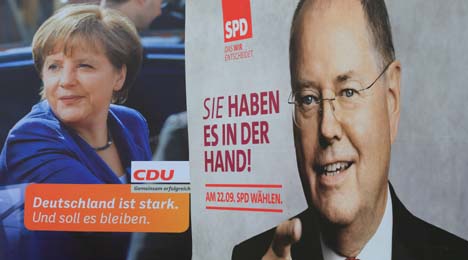 In what has been billed as the primetime TV event of the year, Steinbrück will have a last-ditch chance to close a yawning poll gap against the popular Merkel.

With three weeks to go to election day, the brash, straight-talking but gaffe-prone Social Democrat, who once served as Merkel’s finance minister in a ‘grand coalition’ cabinet, faces an uphill struggle to unseat the unflappable leader of Europe’s biggest economy.

With few truly divisive campaign issues to polarise the electorate — both big parties largely cooperated on the eurozone crisis — the campaign has been the most personality-based of recent times.

“We all know that Angela Merkel is a rather quiet personality who does not like to quarrel on the open stage,” said RTL television’s Peter Kloeppel, one of four moderators for the 90-minute debate starting at 1830 GMT on Sunday.

“Peer Steinbrück is somewhat more aggressive, and that’s what should make this duel more attractive. It will be interesting to watch how they use their temperaments. They can use it for their purposes, or it could count against them.”

Another commentator will be comedian and entertainer Stefan Raab, 46, who has even represented Germany in the Eurovision Song Contest and whose inclusion on the panel may draw in younger voters.

Steinbrück, asked whether he will rein in his famous temper, pledged to stay civil and “not play the hooligan”, in comments to the Stuttgarter Zeitung. For good measure, he guaranteed to “observe central European standards of behaviour.”

He has appeared aloof by dismissing inexpensive wine, complaining about the

chancellor’s salary, offending East Germans and angering the governments of

Merkel, 59, has refused to directly engage or even mention by name her challenger, many of whose party policies she has quietly adopted over the years. One commentator has dubbed the strategy of letting the opponent hurt himself Merkel’s jiu-jitsu style.

If she were facing a US-style presidential vote of being directly elected the country’s leader, Merkel could have rested easy for months. In another poll this week, for ZDF public television, 60 percent of respondents said she was their preferred chancellor, almost double the 31 percent for Steinbrück, with the rest undecided.

On the question of who was more “likeable”, she led her rival by 54 to 16 percent in the Politbarometer poll. Merkel was also considered more “credible” by a 40 to 12 percent margin, and the better manager of the eurozone crisis by 39 percent to 14 percent for Steinbrück.

Only on the issue of social justice, Steinbrück scored a lead of 31 percent to 25 percent for Merkel.

His Social Democratic Party has pledged to introduce a minimum wage, boost child care spots, raise pensions and help the working poor — although none of these topics has so far helped the SPD to turn around the race.

“The CDU doesn’t want an election fight because its strategy has been to put to sleep the SPD voters. And the SPD is incapable of waging a campaign fight as it has proven in the past few months.

“That leaves just one question: ‘Merkel or Steinbrück?’ And in that, Merkel of course has a strong lead.”