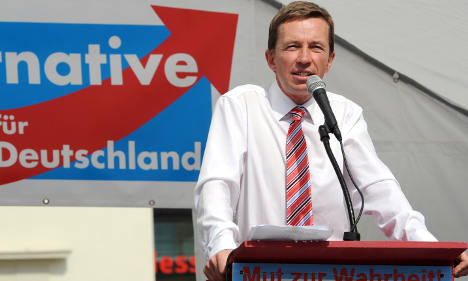 Bernd Lucke, head of the Alternative für Deutschland (AfD) party, was speaking at the rally in Bremen when a group stormed the stage pushing him and attacking 15 other people with pepper spray. One party member was injured with a knife.

Police said that 20 to 25 people had stormed the rally with eight getting onto the stage. Officers arrested three suspects aged 22, 25 and 27.

The AfD were formed last year and are campaigning in Germany’s elections on September 22nd on a eurosceptic platform, although they say they do not want Germany to leave the European Union.

They compare their stance towards Europe to the British Prime Minister David Cameron who wants more powers returned from the European Union to Britain.

Lucke, 61, who was not injured in the attack, criticized left-wing extremists in the aftermath, telling newspaper the Neue Osnabrücker Zeitung that it was time to clamp down on them.

He said it was “time to stop being so patient with left-wing groups and start dealing with them through the criminal justice system.”

The AfD, who are polling at around three percent of the vote, said it was not the first time their party members had been attacked during the election campaign.

Spokeswoman Dagmar Metzger said a party member was attacked in Bavaria at an election stall. “His shoulder was dislocated and while he was on the floor his head was kicked,” she said.

The party has also complained that their election posters have been vandalized.