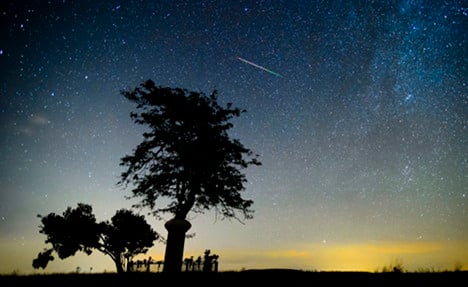 Between 60 to 100 shooting stars will light up the sky over Germany as Perseid’s meteor shower reaches its peak after building up over the weekend. It can be seen over large parts of Europe and happens at the same time each year.

The best time to put on a jumper and camp out for the show is around midnight, and into the early hours of Tuesday, science website Scinexx.de said.

Perseid’s is widely acknowledged as one of the highlights of the meteor calendar, and people in the north and western states will have the best chance at catching the show, national weather service the DWD said.

Thick clouds will obscure the south’s view of any shooting stars, with rain and scattered thunderstorms forecast throughout the night. Temperatures could sink to a jacket-worthy seven degrees C.

Tuesday will see a mix of sun and clouds in central and northern states while the coast will be hit by showers by mid-morning. The south will remain cloaked in cloud, where rain should also be expected until the afternoon. The north will be very gusty, with gale-force blasts along the coast.

These high winds will bring storm clouds to the coast by Tuesday night. The rest of the country should escape bad weather though, staying relatively mild at 14C and for the most part, clear and dry.

Clear skies will not last long, though as Wednesday will start very cloudy. This will mean that while it will be warmer, with highs of 24C in the Upper Rhine area, there is a chance of rain everywhere. The wind should be a little calmer.

Wednesday night will be more of the same, with scattered showers over the north east and cloud everywhere else. There will be, the DWD said, lows of 5-14C.

By Thursday, it might be slightly more summery, with the sun peeping out from an ever-thinning blanket of cloud as the day progresses. Though a few showers shouldn’t be ruled out, temperatures will be more August appropriate – between 21C and 26C.