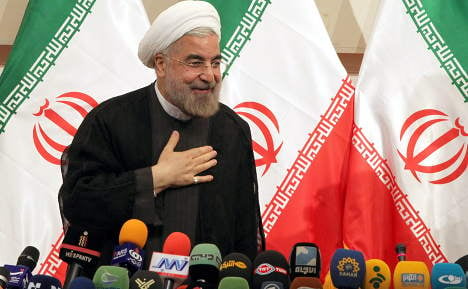 Westerwelle said on Friday that Rowhani’s inauguration offered an “opportunity” to clear the impasse but that “deeds not words” were what counted.

“We want confidence-building measures from Iran and substantial progress in resolving the dispute over its nuclear programme,” he said.

Westerwelle said the West would maintain sanctions to keep up the political pressure on Iran “for as long as we cannot be sure that Iran has renounced its atomic weapons programme.”

“We will seek dialogue with the new government, first on the level of civil servants then perhaps on the minister level,” he said.

Only then would the West determine whether Rowhani and his new government were showing a “new flexibility” in relations, Westerwelle said.

A senior Western diplomat said last month that the so-called P5+1 group of global powers negotiating with Iran hoped to see a new team appointed “soon” in Tehran so talks on the nuclear programme can resume “as soon as possible.”

The remarks came after a meeting in Brussels of the five permanent UN Security Council members Britain, China, France, Russia and the United States plus Germany, their first get-together since Iran’s June vote.

Iran is accused by the West and Israel of seeking to produce nuclear weapons under the guise of a civilian atomic programme. Tehran denies this.

As the talks stall, there is growing international concern over the continuing expansion of Iranian nuclear activities, including the plutonium track.

Rowhani assumes the presidency of the Islamic republic following Mahmoud Ahmadinejad who has ruled Iran for eight years.