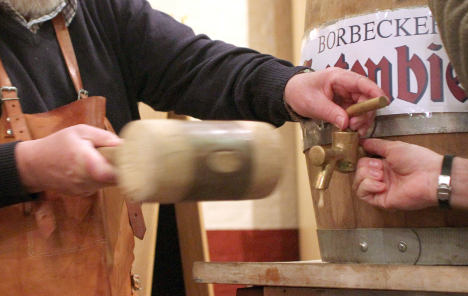 This is no mean feat in Germany where annual per-capita beer consumption has been declining for years, down to a meagre 107 litres now, amid shifting tastes and an ageing population.

As the tradition of whiling away hazy afternoons in a Biergarten fades and a new generation has discovered a taste for other alcoholic beverages, competition has become harsher on the German beer market.

But while the global giants of the amber brew have battled it out for market share, it is the small brewers who have been among the winners, growing in number to quench a new thirst for centuries-old artisanal beers.

“Small breweries can offer variety. They have more flexibility,” said Jürgen Solkowski, who 10 years ago refurbished a castle’s outbuilding on a lake in Potsdam near Berlin and turned it into the restaurant-brewery “Meierei im Neuen Garten”.

He is among a wave of brewers harking back to Germany’s ancient country-inn tradition of making unique beers on-site, using top secret recipes and offering a return to quality.

It’s a promise that often comes at a price. At another castle brewery, Maxlrain in the Bavarian Alps, the golden brew is up to 50 percent more expensive than the well-advertised brands known as “television beers”, said the brewery boss Erich Prinz von Lobkowicz.

The award-winning Maxlrain Private Brewery, in business since 1636, boasts “many nuances of taste” — in fact 15 craft-brewed varieties that the business says are enjoyed by connoisseurs the world over.

“The medium-sized breweries are increasingly exporting their speciality beers. Demand especially in China has risen sharply in recent years,” said Roland Demleitner, of the German federation of private breweries.

At the back of the castle of Au-Hallertau, barrels of beer are waiting to be shipped to China.

The global success of German craft brews, which started with exports to neighbouring Italy, is based on strong local roots, said von Lobkowicz, whose brewery exports a quarter of its production, without spending any money on advertising.

Its success has built on word of mouth, the medals it has won in contests, and the 50-odd events held each year in the almost 400-year-old castle, an image of which adorns the labels of the bottles.

What unites the craft brewers is a desire not too grow too big.

With an output of six million litres a year, “we will remain in this order of magnitude, making quality beer at a premium price,” said Beck von Peccoz, a sprightly man in his fifties sporting a traditional Bavarian jacket.

Solkowski in Potsdam makes 100,000 litres a year and sells it all in his restaurant, where hops, malt, water and yeast – the only ingredients allowed under the 1516 beer purity law – bubble away in rustic copper vats.

To keep prices down, the beer here is not filtered or bottled but served straight from the tap, said the man in his 60s who hopes to pass the brewery on to his son.

While boutique breweries have been popular especially in the United States and Belgium, German speciality beers are “still a niche market” but have “considerable potential in the medium and long term,” said Demleitner.

The main concern Solkowski has, however, is the immediate future – and whether the summer weather holds. On a sunny Saturday, he said, beer consumption triples.