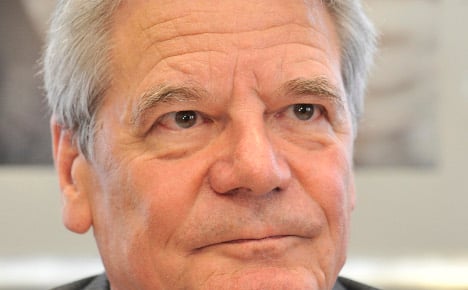 “I never thought that the fear that secure communication was no longer possible could ever arise in Germany again,” he told the paper. But he said this was exactly what had happened in the past weeks.

“The scandal has really troubled me,” President Gauck told the Passauer Neue Presse regional newspaper on Friday. “To be honest with you, I’ve also thought about whether I can still talk on the phone or send an email openly at all,” he said.

The state had a duty to protect citizens from the threat of terrorism, which Gauck conceded means sometimes limiting their freedom in order to keep them safe. But this must always be done with respect for the right to private communication guaranteed in Germany’s constitution, he said.

“It’s very clear that it must always be kept in proportion,” he told the paper. “What is proportional when and why should be dealt with very carefully.”

“The fear that our telephone calls or emails will be intercepted and stored by foreign secret services limits our feeling of being free,” he added.

It was up to Germany, he said, where strict data protection and privacy rules developed as a bullwark against the abuses of the Stasi and Gestapo secret services, to pass on these lessons to the rest of the world.

“It could be that the Americans and the Germans have different perceptions of data protection. But we Germans have had to live through abuse of state power with secret services twice in our history,” said Gauck, who himself came to prominence as an anti-communist civil rights activist in East Germany.

“That’s why we’re particularly sensitive on this issue, and that’s something our American friends, among others, are going to have to put up with.”

The president also subtly sent a message of support to fugitive whistleblower Edward Snowden, whose revelations over the past weeks had brought the scandal to light.

“Whoever brings [information] to the public and acts on grounds of conscience deserves respect,” he said.

In a further rare intervention into politics, Gauck demanded Angela Merkel’s government enter into binding agreements with Germany’s allies to secure these freedoms.

“We have to make sure that even our allies’ secret services respect the boundaries we find necessary here,” said the president. A binding international agreement – if that was what was needed – “should be created urgently to safeguard civil rights,” he added.