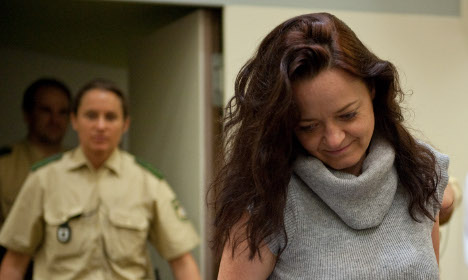 The man, who lived in the same building as Zschäpe in Zwickau, said in the evenings she often used to join him and other neighbours in his cellar for a drink, a chat, and a laugh.

“There’s nothing wrong with that, it was neighbourly. It’s like that in the East,” said the unnamed witness, a labourer in his mid-40s. She was “a lovely, good neighbour…friendly, fun, you could have a laugh with her,” he added.

She had even had her moments of generosity, he said, and told the court how she had once bought them all pizza while the group watched football in the back yard.

Chatting over a beer – Zschäpe herself rarely drank, he said, enjoying only the odd glass of Prosecco or wine – they had never talked about politics, or foreigners, he insisted.

Also, she had never brought up or referred to the portrait of Adolf Hitler casually on display on top of the TV-set in his cellar. The man said he had inherited the memento from a deceased neighbour and protested that it had no political significance.

The friends were close enough to call Zschäpe – who had told them her name was “Susann Dienelt” – by the affectionate nickname “Dienelt Maus” or “Diddl-Maus.” “First of all her name is Dienelt and second of all she’s a mouse,” explained the witness.

The man said he’d had little contact with Zschäpe’s flatmates Uwe Mundlos and Uwe Böhnhardt, who together with Zschäpe are thought to have formed the nucleus of the NSU killer cell. She had told her neighbours that one of them was her boyfriend, the other her brother – but the witness hadn’t known their names and had never asked.

In the end though, the “good neighbour” is thought to have set the whole house on fire – prosecutors say taking the neighbours’ deaths, including that of an 89-year-old woman who also lived in the building, as possible collateral damage.

When her two male accomplices died in a murder-suicide in early November 2011, Zschäpe is accused of pouring petrol all over their shared flat and igniting it, setting off an explosion so strong that part of the building’s outside wall blew off.