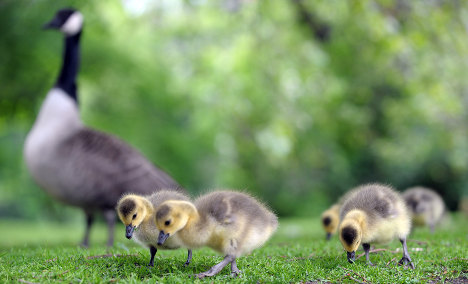 Bernhard Ruß, mayor of Sand am Main, a small Bavarian town, said hygiene problems had arisen – or rather dropped – from the hundreds of geese which were visiting the ‘bird paradise’ the community was so proud to have created on a former quarry site.

The town, on the banks of the lake by the River Main, was becoming overrun by the geese, the Süddeutsche Zeitung reported. Ruß told the paper: “They reproduce unbelievably fast.” They spend the summer on the little sandy islands in the lake, and often paddle over to the shore – a popular spot with holidaymakers.

The problem is their toilet habits, which Ruß said, were random, and rather prolific.

“I recently tried to count but stopped at 40 geese. But there have been [as many as] 200 in one group. And excuse me, but what they leave behind…. up to two kilos of excrement per goose per day, divided up into more than 150 portions. At some point it stops being funny.”

He said tourists who camped during the summer and at weekends around the town were loyal and would not be scared off by a bit of goose poo. “But it cannot become too much,” he added.

Farmers in the area might also lose their seed to the gobbling geese, he said, so action was required to keep their numbers down.

The town council had decided to build bridges to the little goose islands in the lake to enable natural predators to go and snack on the birds, to keep the numbers under control.

But this will take time, so Ruß is also calling in hunters to help – although they will have to be at least as cunning as foxes to get the geese, he suggested.

“The animals recognize the hunters. If they come with a rifle, no matter how the hunter is dressed, the geese realize what they are after.

“It is completely different when they see me, the mayor. I was down at the lake recently and they simply went three metres out into the water and looked at me,” said Ruß.

“As if they were saying, ‘You with your Sunday clothes on, you’re not going to come in after us.'”