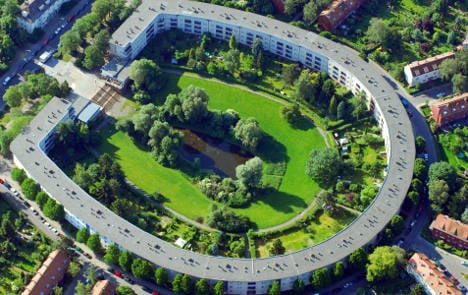 The housing estates stand out internationally not only because of their great importance, but also their good state of preservation.

They were added to the World Heritage List in 2008 having been proposed two years earlier by Ingeborg Junge-Reyer in 2006, referring to the UNESCO strategy to increasingly protect sites of the Modernism as World Heritage.

The six housing estates were built between 1913 and 1934, showing architects of the Classical Modernism responding to the lack of housing after World War I at the highest architectural level. These were modern, affordable flats with kitchens, bathrooms and balconies, in houses without backyards or side wings, flooded instead with light, air and sunshine.

The high-quality architecture, the language of the shapes, floor plans of the flats and urban design of the estates became a role model for the entire 20th century.

The Hufeisensiedlung in Neukölln is perhaps the most famous, as the large complex is in a horseshoe shape. The others are the Gartenstadt Falkenberg in Köpenick, the Siedlung Carl-Legien in Prenzlauer Berg, the Weiße Stadt in Reinickendorf, the Siedlung am Schillerpark in Wedding and Siemensstadt in northern Charlottenburg.

RELATED PHOTO GALLERY: Take a look at all six

Planning and construction of thsee housing estates marked a structural change in housing, which was only possible in this way because of the special political and social conditions during the years following World War I. As a counter-model for private-sector speculative building and its tenements, they were to represent a new architecture for a new society.

Aesthetic perceptions of the new wave of arts and architecture were, therefore, linked with political left-wing social concepts. Trade unions, cooperative and municipal building companies became the main supporters of this constructed utopia.

Today, a second change is taking shape. The public sector has been withdrawing from housing construction and flats are being sold to private tenants and investors.