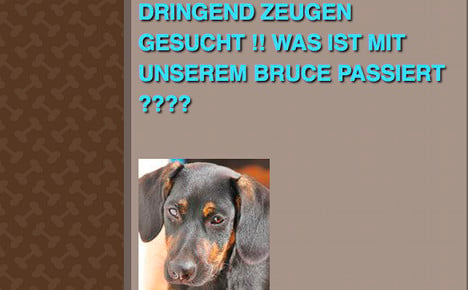 Bruce, a mongrel, was rescued from an animal shelter on the island of Fuerteventura where he was due to be put down. The charity Canary Dogs brought him to Germany and found him a foster family.

But he ran off while being taken for a walk in Arnsberg, North Rhine-Westphalia and ended up confused on the autobahn. Police were subsequently informed that Bruce was missing.

Police received a call at around 3am, saying that a dog was running around on the A46 motorway.

After failing to catch him, officers decided to try to shoot the dog, reasoning that human life was in danger, Der Tagesspiegel newspaper reported.

Two shots were fired, despite the dark, and it seems Bruce was hit. But he still refused to leave the autobahn, and the police officers chased him off with their car. They denied initial reports that they deliberately ran the dog over.

Bruce has not been seen since, but the incident, widely reported in the German press on Thursday, triggered a series of online death threats to the officers responsible.

Sandra Ehlers, joint head of Canary Dogs, voiced annoyance about the police’s action. They should have, she said, told them straight away that they had found a dog known to be missing.