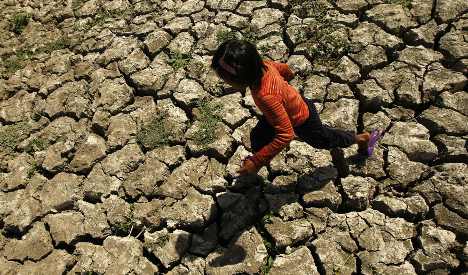 The forecasting algorithm is based on the interactions between sea surface temperatures in the equatorial Pacific and the rest of the ocean, and appears to warn of an El Nino event one year in advance instead of the current six months.

“Enhancing the preparedness of people in the affected regions by providing more early-warning time is key to avoiding some of the worst effects of El Nino,” said Hans Joachim Schellnhuber, director of the Potsdam Institute for Climate Impact Research.

The new technique also appears more reliable than conventional forecasts, Schellnhuber and colleagues reported in the US journal the Proceedings of the National Academy of Sciences.

Scientists analyzed more than 200 measurement points in the Pacific dating back to the 1950s. The interactions between distant points helped predict whether the El Nino warming would come about in the eastern equatorial Pacific.

Scientists used it in 2011 to correctly predict the absence of an El Nino event last year, while conventional forecasts wrongly said there would be significant warming well into 2012.

Natural forces cause the El Nino Southern Oscillation (ENSO), which researchers described as the “most important phenomenon of contemporary natural climate variability.”

The pattern has been known to cause drought in South America, Indonesia and Australia, heavy flooding in places like Peru and Ecuador, and possibly the severe winters in Europe, unusual monsoons in East Asia and hurricanes in the Caribbean.

The residents of Berlin, Duesseldorf, Frankfurt and Munich believe current government legislation is “demonstrably inadequate to protect people’s health”, according to the organisation, Deutsche Umwelthilfe (DUH).

Levels of particulate matter and nitrogen dioxide in Germany are up to five times higher than the safe levels recommended by the World Health Organization (WHO), according to DUH.

The complainants are calling for immediate action to bring about “a reduction in dangerous air pollutants from, among other things, traffic, wood burning and agriculture”, said Juergen Resch, national director of DUH.

“Politicians are doing too little to protect people like me who live on a busy road,” said complainant Volker Becker-Battaglia, from Munich.

This time last year, a new coalition government was elected in Germany on a promise to make environmental concerns one of its top priorities.

The Greens entered power for the first time in more than two decades, promising that Germany would end coal power and generate 80 percent of electricity from renewables by 2030.

Germany has accelerated plans to import liquefied natural gas (LNG) by sea and has even decided to reactivate mothballed coal-fired power plants.

In 2021, climate activists won a landmark victory in Germany when the constitutional court ruled that the government’s climate plans were insufficient and placed an unfair burden on future generations.