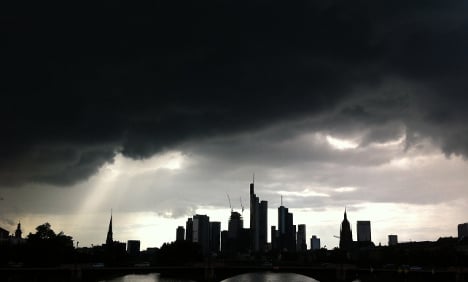 On Friday early rain in the north west will gradually ease off as the weekend approaches, but most of the country will remain under a thick layer of cloud.

Isolated showers could break out here and there, with more frequent rain in the Alps. Only in the very far east along the Polish border was there a good chance of some longer sunny spells, said DWD.

The rain should ease off for short while on Friday night, only to return later on, spreading from the west down into the east and south east throughout the night.

Saturday sees a similar picture emerging, with most places seeing heavy cloud cover and isolated showers which could turn heavy or stormy in some areas of the south and east.

Early rain in the north west should ease off during the morning, giving way to some sunny spells by the afternoon, particularly along the North Sea coast. Temperatures across the country will range from 14-19C and could reach over 20C if the sun appears in the west.

Rain hitting the south and east overnight will ease off towards morning in all but Alpine areas, with clouds dispersing to make way for early morning fog in some places.

On Sunday it will be much the same story of isolated showers and the odd storm in the southern and far eastern parts of the country, with the rain sticking around longer in the Alps mountains.

The rest of the country will remain dry and overcast, with parts of the south west and Baltic coast being treated to some longer bursts of sunshine in moderate temperatures of between 16 to 23C.

By Monday, the north will again be stuck under thick cloud bringing some rain showers, growing more frequent in the west and north west as the afternoon turns to evening. Meanwhile the south, particularly Bavaria and Baden-Württemberg, can bask in more frequent bouts of sunshine.

Otherwise skies will stay overcast but dry, with highest temperatures reaching 16 to 22C in the north and between 21 and 26C in central and southern areas.