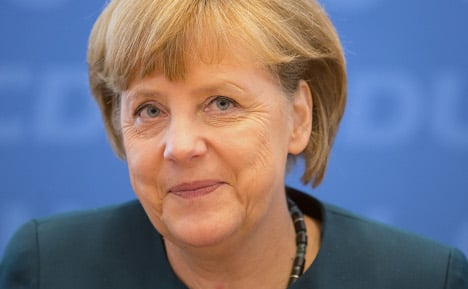 The opposition Social Democrats – who are seeking to rule with the Greens party but are badly trailing Merkel’s Christian Democratic Union (CDU) in the polls – predictably labelled the conservative party manifesto a “fairytale book”.

But even Merkel’s Vice Chancellor Philipp Rösler, head of junior coalition partners the pro-business Free Democratic Party (FDP), also charged that the campaign-mode CDU had succumbed to the “sweet poison of spending.”

The CDU’s own pro-business wing also voiced doubts the tens of billions of euros in pledges would be met.

“It’s practise in this country to make election promises before the polls which are then, in the government and coalition negotiations, made redundant,” said the head of the party’s economic council, Kurt Lauk.

“Voters have known for 50 years that this is how it works,” he added in stunningly frank comments on ARD public television.

Merkel, who first presented the programme Sunday with the CDU’s Bavarian sister party the CSU, was seeking to maximise exposure by speaking again before some 650 delegates Monday as campaigning heats up for the September 22nd poll.

Unlike her opponents, Merkel has promised not to raise taxes and to balance the budget, with no new debt from 2015, saying on Sunday that “we cannot keep living at the expense of future generations.”

Gero Neugebauer, political scientist at Berlin’s Free University, said Merkel had co-opted most of the Social Democratic Party’s (SPD) signature issues, from steps to cap inner-city rental increases to promoting the status of women in business, depriving her opponents of campaign issues while seeking to capture the political centre.

“The party is trying to turn into a movement,” said Neugebauer, almost solely focused on its star politician Merkel.

“Merkel’s role is the promise of credibility,” Neugebauer said about the chancellor who is consistently chosen in polls as Germany’s most popular politician for what many voters see as a no-nonsense and pragmatic leadership style.

“But the task of turning the promises into reality will be that of [Finance Minister Wolfgang] Schäuble,” added Neugebauer, who cautioned that the 120-page manifesto is peppered with “ifs” and that many pledges are predicated on a humming economy and healthy finances.

“There are no proposals on how to finance these crazy promises,” charged Steinbrück, who also said the CDU had written its programme in an “undemocratic, top-down” way without rank-and-file participation.

The mass-circulation Bild daily in a commentary said the programme was the most Social Democratic, Green and cautious the CDU had ever campaigned with, designed to keep the door open for almost any potential coalition partner.

“Strictly speaking, the CDU/CSU could boil down their programme into three points,” the paper said. “1. Merkel. 2. Keep it up. 3. Keep it up with Merkel.”