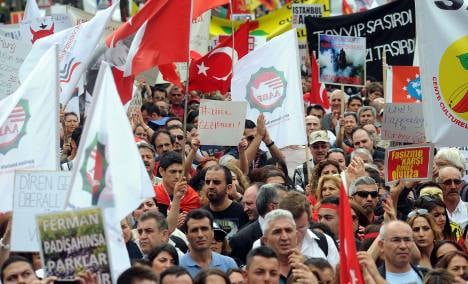 Turkey has called in Germany’s ambassador to Ankara in the latest escalation of the spat between the allies over Prime Minister Recep Tayyip Erdogan’s ruthless treatment of protesters in Istanbul and Ankara.

German news channel NTV said Ambassador Eberhard Pohl spent over an hour in his meeting with foreign ministry undersecretary Feridun Sinirlioglu, but that neither of the two sides had afterwards wished to comment on what was said.

The meeting came a day after Germany summoned the Turkish ambassador to discuss sharp criticism from Ankara over reluctance to move forward with Turkey’s EU membership bid.

Meanwhile tens of thousands of German residents travelled to Cologne on Saturday to show solidarity with the Turkish protests, marching under the motto “Taksim is everywhere,” the Süddeutsche Zeitung reported.

In Turkey meanwhile, police again used water cannon to clear protesters from Istanbul’s Taksim square on Saturday night, where people had gathered to hold a vigil for the four people killed since demonstrations turned violent on May 31.

Erdogan has faced international condemnation over his handling of the crisis, which has tarnished his nation’s image as a model of Islamic democracy. Germany’s views carry particular weight as around three million people with Turkish roots live in Europe’s top economy, which is Turkey’s biggest trading partner.

“What is happening in Turkey at the moment does not meet with our ideas of freedom of assembly, (or) freedom of expression,” Chancellor Merkel told broadcaster RTL on Monday in reaction to news coverage of riot police breaking up demonstrations in Istanbul and the capital Ankara.

“I am in any case shocked,” she added.

Aydan Özoguz, vice chairman of the German opposition Social Democrats (SPD) on Saturday distanced herself from calls from within Germany to denounce Erdogan as a dictator, pointing out that the Turkish people had elected him with 50 percent of the vote.

“In the end of course it’ll be the Turkish people who decide whether Erdogan continues to rule,” Özoguz told Deutschlandradio Kultur radio station.