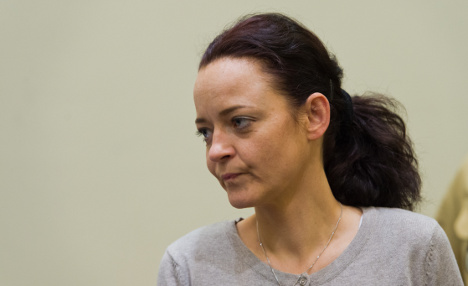 The Süddeutsche Zeitung, in an article published on Saturday, called the lengthy letter “highly problematic” and said lawyers for some of those believed to have been killed by Zschäpe and her associates want the letter to be admitted as evidence.

Although she has refused to say anything in either court or a possible plea negotiation, the newspaper said she has struck up a friendship with a right wing extremist serving a prison sentence in Bielefeld. The man started serving an eight-year sentence in 2007 for a major robbery involving extortion.

As a 20-year old, the convict shot a Tunisien-born employee at a food market four times. The man only survived because of an emergency operation.

The convict’s name is Robin S. and he belongs to the radical-right scene in Dortmund. Zschäpse doesn’t know him personally but has trusted in him, the paper said. She told him that she feels she has been prejudged.

The paper said the letter not only gives readers insight into Zschäpe’s thinking, but is also politically and legally highly relevant.

Zschäpe thanked Robin S. for supporting her and for agreeing to have contact with her even though he is facing a hearing soon on whether he could receive early release date.

The accused radical right terrorist said she wonders whether she can get a fair trial and noted that Chancellor Angela Merkel, during a visit to Turkey, promised a full investigation as to what happened with the NSU affair. She also told Robin S. that she feels the interior minister has prejudged her and she discusses details of her life.

As expected the defence attorneys won’t comment, while lawyers for the deceased individuals are pushing for the letter’s contents to be revealed, though lawyers for the state’s prosecution have yet to voice an opinion on the letter, which Zschäpe started writing in March.

The letter is also believed to contain some neo-Nazi code language. For example Zschäpe suddenly writes that one shouldn’t freeze when it is 18 degrees. The number 18 is a code number for Adolf Hitler, as A is the first letter of the alphabet and H is the eighth.

As important as the letter is for some of the co-plaintiffs in the case, the higher court in Munich apparently thought the letter was irrelevant, the paper wrote. The letter passed through the post control of the court and was first discovered in Bielefeld, where the convict Zschäpe is writing to is being held.

The letter was then sent to the Munich court but it hasn’t been reviewed for its relevance yet. A court spokeswoman denied that the court had made a mistake by overseeing the letter.

Zschäpe said in the letter that she felt mistreated already as a child and that she was not going to confess, nor would she damage anyone who is close to her. She said she feels she is a unique person.