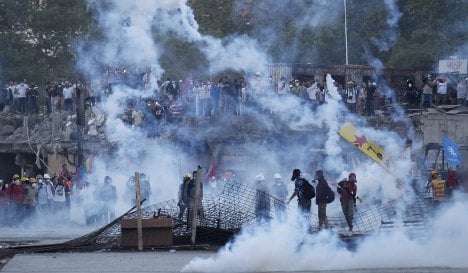 “The images from Taksim Square are disturbing,” Westerwelle said in a statement. “The Turkish government is sending the wrong message to the country and to Europe with its response to date to the protests,” he said, adding that Ankara must do “all in its power” to protect democratic rights.

“We expect Prime Minister (Recep Tayyip) Erdogan to de-escalate the situation in the spirit of European values and initiate constructive communication and peaceful dialogue.”

German Chancellor Angela Merkel on Friday urged Ankara to renounce violence against protesters after deadly unrest in the country and said Berlin was monitoring developments closely.

Erdogan was to hold talks with some protest leaders on Wednesday, but many demonstrators said the unexpected crackdown in Taksim Square, which had seen no police presence since June 1, had made them lose faith in any dialogue.

The capital Ankara also saw renewed clashes overnight as riot police used gas, pepper spray and water cannon against thousands of protesters near the US embassy. Some threw rocks in response.

Four people, including a policeman, have died in the unrest. Nearly 5,000 demonstrators have been injured, tarnishing Turkey’s image as a model of Islamic democracy.