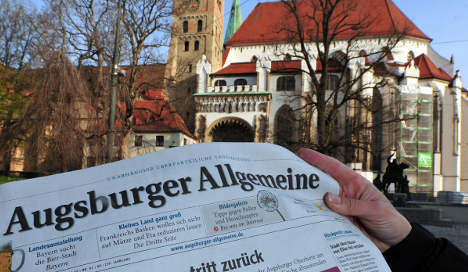 Augsburg politicians Bernd Kränzle and Rolf von Hohenhau from the conservative Christian Social Union (CSU) were so outraged by remarks from a retired former colleague that they are threatening her with legal action – and a five-figure fine – unless she takes it back, the Süddeutsche Zeitung said on Tuesday.

In the letter, 68-year-old Johanna Holm, herself a former CSU member, said Kränzle and Rolf von Hohenhau had “kicked out” two “deserving” colleagues in order to put their friend up for September’s parliamentary elections.

Holm is sticking to her guns, though. “In the first instance, as a lone pensioner with a €1,100 pension, I was shocked, but I’m standing firm,” Holm, who left the Bavarian sister party to Chancellor Angela Merkel’s Christian Democrats two years ago, told the paper.

The politicians say the letter to the Augsburger Allgemeine newspaper taking issue with staffing decisions in the Augsburg chapter of the party, amounted to defamation and are demanding €5,000 each in compensation.

Holm’s lawyer Andreas Kohn said she had only been stating the facts, which had also been widely reported in the regional press.

But if the two sensitive politicians had meant to silence criticism, their plan has backfired, wrote the paper.

Internet forums and newspaper correspondence columns are now buzzing with furious comments accusing the CSU of abuses against freedom of speech and of attempting to muzzle all unwanted criticism.

In the face of public outrage, Kränzle has since attempted to backtrack and his colleague von Hohenhau said he was willing to negotiate with Holm.