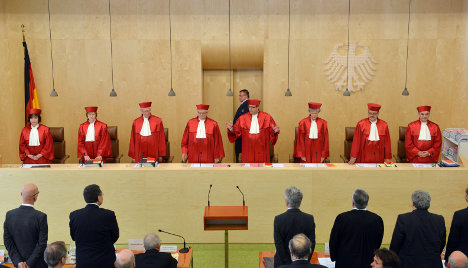 Critics of the ECB’s “Outright Monetary Transactions” (OMT) have asked the court to examine whether the scheme is in line with Germany’s Basic Law or whether it breaches the central bank’s mandate.

Bundesbank President Jens Weidmann, one of the most vocal critics of the scheme, will give his expert opinion during two days of hearings which began Tuesday, as will ECB executive board member Jörg Asmussen.

German Finance Minister Wolfgang Schäuble, too, addressed the court. It was “up to the ECB to decide, within its wide remit, which are the correct monetary policy measures to take,” the minister insisted.

As a European institution, ECB actions did not fall under the jurisdiction of the constitutional court, Schäuble argued.

If it did, then the ECB would also have to answer to a whole range of national constitutional courts with possibly very different rulings.

The German government “sees no sign that the measures breach the ECB’s mandate,” which was to safeguard price stability, Schäuble insisted. The ECB “cannot solve member countries’ problems, but only buy them time,” he said.

Furthermore, no bond purchases had yet been made under the OMT scheme “and

so it can only be judged when a corresponding decision has been made,” the

Ever since the ECB unveiled the OMT to buy up the sovereign debt of the euro area’s most debt-wracked members last August, fears of a break-up of the

Europe’s storm-battered financial markets have enjoyed a period of relative calm, without a single OMT ever being carried out.

Nevertheless, like many of the ECB’s emergency anti-crisis measures, the OMT has its critics — both in the pro-euro and anti-euro camps — who claim it oversteps the central bank’s mandate and is unconstitutional.

They filed similar complaints against the eurozone’s EFSF and ESM bailout funds last year, but their objections were thrown out by the Constitutional Court last September. The OMT is different, however.

While the EFSF and the ESM were set up by governments, the OMT programme is the brainchild of the ECB itself, drawn up within its own monetary policy mandate, which is by definition independent and must remain free from any political interference.

Very strict conditions have been laid down if a country wants to be eligible for support from the OMT scheme and the ECB has said it will decide on a case-by-case basis whether to grant a country access.

The plaintiffs, a diverse group of German politicians, lawyers and citizens, argue the ECB is creating risks for German taxpayers that their elected representatives cannot control.

While the Constitutional Court is not expected to make a ruling on the OMT before the autumn, observers suggested the two days of hearings could become a sort of showdown between the Bundesbank and the ECB. But Bundesbank chief Weidmann denied that would be the case.

“It’s not about two central banks fighting before the court,” Weidmann was quoted by Dow Jones Newswires as saying at a Bundesbank conference in Frankfurt on Monday.

“Two representatives of the central banks were invited as experts and will answer the court’s questions,” he added.

Asmussen told the mass-circulation daily Bild in an interview on Monday that “we’ve been invited as experts and the hearings will provide a good opportunity to explain the advantages of the OMT.”

In an interview with German public television on Monday, ECB president Mario Draghi defended the OMT programme and rejected concerns that the scheme was effectively a way of printing money to pay for governments’ debts.

“It will only come into action if confidence in the euro fails, not to finance states,” Draghi said.

“We won’t intervene to ensure a country’s solvency,” he said.

And Draghi insisted that the “risks for German taxpayers are much less than they were a year ago.”