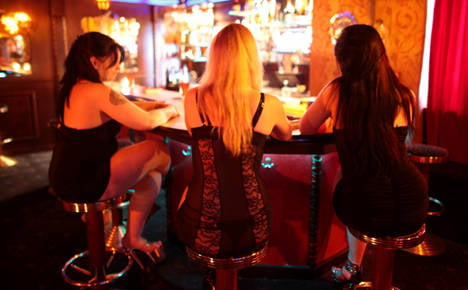 Show on public broadcaster ARD, “Sex – Made in Germany” shook up the country’s normally mundane Monday television offerings, exposing the darker side of prostitution just over ten years after it became legal in Germany.

By doing so, the government at the time hoped to clean up the industry, giving prostitutes more rights and security.

Yet the film, which frequently used hidden cameras at red light establishments, did not quite show a success story. Two years of interviews, brothel visits and undercover reporting showed an industry flourishing – but one in which “women have become a resource, which are being used as efficiently as possible.”

Over a million men pay for sex each day in Germany. Many of these now visit “flat-rate” brothels where men can paid a mere €49 for a night of as much sex as they can muster. These have become an increasingly popular business model in Berlin where “sex is cheaper than anywhere else,” a brothel owner told the journalists.

“Most men overestimate and say that they will ‘go in a room’ six, seven, eight times in a night. But that doesn’t happen,” another flat-rate brothel owner explained. While this is good for business, it leaves the women with little earnings.

“Now everything is legal, brothel owners can sleep better at night,” he added. Another, a single father of four, told the team how he sent his daughter to an elite boarding school in the United Kingdom.

Thousands of punters each year

So popular are the country’s cut-price offerings, that specialist holiday operators now offer tailored “sex-holidays” for groups of men from Asian, the Middle East and North America. They are taken around brothels for six straight days of drunken debauchery.

Guests also travel from closer afield, with one Danish man explaining that “the quality is good and everything is alright.” He had travelled 300 kilometres to visit the northern German brothel where documentary makers Tina Soliman and Sonia Kennebeck were filming.

The pair also visited Europe’s biggest brothel in Stuttgart, where 55,000 men came in and out of its doors each year. Many of the women there are not German though, as 65 percent working in the country are foreign – often from eastern European countries Like Romania and Bulgaria.

Some were homegrown though, with one prostitute admitting that “lots of girls who are taking their high school diploma come and work for a day or two over the weekend to earn a bit of money, because they no longer see it as something bad.”

Despite the government’s intentions of controlling the working conditions for women in brothels, the film touched on several cases where eastern European women had come to Germany for a better life. But one Romanian woman, found herself having sex with up to 40 men a day until, eventually, authorities shut the business down for violating health codes.

What the government does seem to be profiting from since legalizing prostitution though, is the tax it generates, daily newspaper the Frankfurter Rundschau noted. Even street prostitutes pay tax, meaning what one brothel press spokesman said, “the state has become the modern day pimp.”