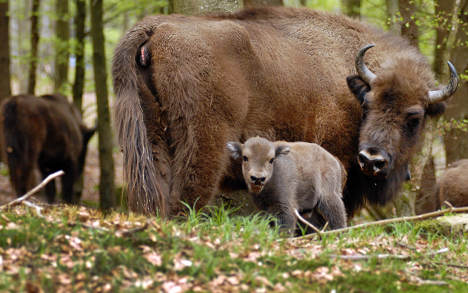 The herd, which was released into the Rothaar mountain range in North Rhine-Westphalia, is currently roaming an area of between 2,000 and 2,500 hectors, according to the “Wittgenstein Wisent World” animal protection group.

Ranger Jochen Born, who encountered the latest addition to the herd by chance, said the calf was “alive and kicking”.

“They’re letting themselves be seen more than we expected,” Johannes Röhl, estate manager for Prince Richard of Sayn-Wittgenstein-Berleburg, said.

The prince has long been campaigning for the reintroduction of bison back into the German wild.

The appropriately named “Quintus” is the fifth bison to be born as part of a species protection project but stands out as the first to be born in the wild. The other four were bred in captivity.

A total of nine bison now live in the Rothaar mountain range, while another herd lives in an enclosure.

Two of the bisons have been fitted with GPS chips so their movements can be monitored.

In the past bisons were known to range in large parts of Europe though they were hunted almost to extinction in the nineteenth and twentieth centuries.

The herbivorous even-toed ungulates do not pose a risk to humans. Nevertheless, animal experts are advising people to keep their distance as the mother bison might be feeling particularly protective of her star calf.