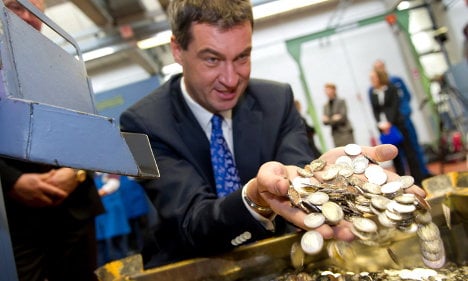 Economists worry that eliminating the smaller coins means retailers will round up their prices, thereby contributing to higher price increases, the Bild newspaper reported on Friday.

The idea was floated by an EU politician from Finland, which has already eliminated the smaller coins, the paper noted.

Bild reported that the EU is considering introducing a one and two-euro bill. Ernst Hinsken, a politician with the Christian Social Union thinks this will improve the euro’s acceptance abroad and make tipping easier.

Björn Sänger, a Free Democratic Party politician said, “In the USA the one dollar note works well, why not here?”

Finally on the money front the new €5 note continues to provoke a lot of compliants as the new bills are not accepted by many machines.

While the German railroad has said it will update software on its ticketing machines by the end of the month, the new bills continue to be useless at many parking and cigarette machines throughtout the country, the Frankfurter Allgemeine Zeitung reported on Friday.

The new money has new security features and weighs a bit more and is therefore not being accepted by machines that have been calibrated to accept the older money, the paper said.

The old machines have to be updated with new software that recognizes the new bills, but that takes time. Sometimes this can be done electronically, as in the case of the railroad, but often it requires a technician to go out and update the code.