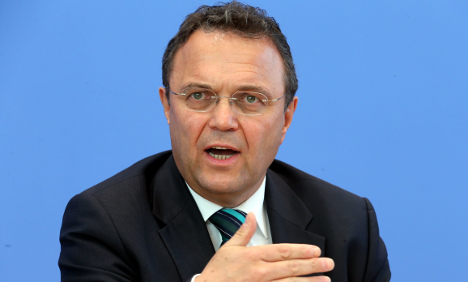 Friedrich, in an interview published Saturday in the Neue Osnabrücker Zeitung, said, “we have to legally make it clear that using violence to accomplish a religious goal results in an automatic expulsion.”

Friedrich said he will introduce a draft bill at the conference of state interior ministers next week that calls for laws to tougher expulsion laws for extremists.

The paper asked if he was also in favor of making it easier for the government to curb social welfare payments to religious leaders who preach hate.

Friedrich said, “We want to make sure that hate preachers leave the country as soon as possible, then such a question becomes irrelevant.”

The interior minister also warned that Syria is becoming a magnet for European Islamic fighters and estimated that some 30 German Islamists are currently in Jihadist training camps in Syria.

“It is to be feared that sooner or later these Islamists will come back against us.” He said as many as 700 radical Islamists from Europe are in jihadist training camps in Syria.

Many of these people get into Syria via Egypt, which is becoming a hub for radical Islamists from Germany and Europe, he said.