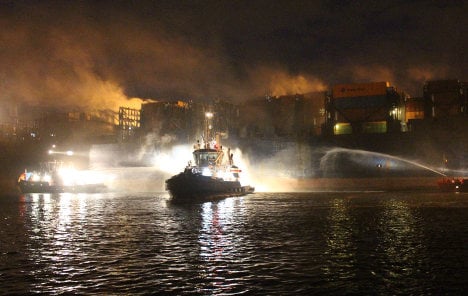 Fire fighters said they had only narrowly been able to prevent a catastrophe on May 1st when the freighter “Atlantic Cartier” caught fire – complete with its radioactive load.

Tens of thousands of people were gathered just a few hundred metres away to celebrate the Evangelical church day when the ship went up in dramatic flames.

Fire fighters were able to quickly identify the containers which had the radioactive cargo and remove them before anything worse happened. The authorities confirmed that the ship had been carrying around nine tonnes of the dangerous uranium hexafluoride, a toxic chemical used in the nuclear industry, as well as four tonnes of explosives, the Süddeutsche Zeitung newspaper reported.

The Green party forced the information into the open with a written question to the city government, local radio station NDR 90.3 reported.

“Hamburg just managed to scrape past a catastrophe on May 1st,” Anjes Tjarks, Green spokesman for harbour policy told the Süddeutsche Zeitung.

“It is a monstrosity that the government did not inform the public about this near-catastrophe of its own initiative. One has to speak of a cover-up attempt.”

Yet Frank Reschreiter, spokesman for Hamburg’s interior authority, said the dangerous cargo was known about – which was why the fire fighters knew to remove the relevant containers. Nothing dangerous leaked, he said.

Now the city government has admitted that radioactive material had been brought into the harbour on Atlantic Container Line ships 21 times in the past three months.

Concrete information about which ships were being used to take the radioactive substances, and which route they were taking, would not be revealed, Hamburg’s government said.

Most of the shipments were due for a uranium-enriching facility in Lingen, Lower Saxony, NDR 90.3 reported on Friday.