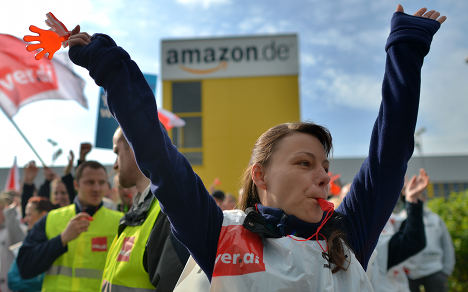 Employees at two logistics centres in Bad Hersfeld and Leipzig launched a strike with the start of the early shift at 6am, the country’s largest services sector union Verdi said.

In Bad Hersfeld, strikers planned to march to a rally in the city centre at around 11am, while employees in Leipzig rallied in front of the warehouse. “There’s a good atmosphere. The whole thing is really great,” said Verdi’s chief negotiator Jörg Lauenroth-Mago.

Verdi is demanding that Amazon’s 9,000 employees in Germany be paid according to a sector-wide wage deal for the retail and mail-order industries. But the head of Amazon Germany, Ralf Kleber, rejected such demands in recent press interviews.

Bad Hersfeld is the largest of Amazon’s seven distribution centres in Germany, with a workforce of more than 3,000. The Leipzig site employs around 2,000 people.

Amazon says it pays an hourly wage of €9.30 to employees in their first year and then €10 after that.

Verdi is calling for a minimum hourly wage of €10.66 euros for Leipzig. Amazon’s working conditions in Germany were the subject of a public television documentary earlier this year which accused the group of bringing workers in from crisis-hit countries such as Spain to work at Amazon

The documentary alleged that employees were subjected to bullying from security personnel, some of whom wore clothing associated with neo-Nazi groups.

It also alleged that Amazon paid the workers less than advertised and that their belongings were regularly searched in the temporary housing they were provided.