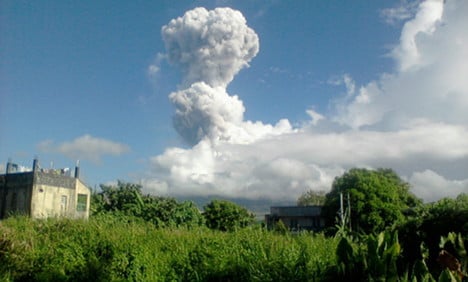 Up to 20 foreigners and their guides were on the slopes of picturesque Mount Mayon when it erupted without warning, and rescue workers had been dispatched on helicopters to search for survivors, officials and a tour operator said.

“It rained like hell with stones,” local tour operator Marti Calleja quoted an Austrian woman who survived the ordeal as saying.

“The rocks that came crashing down on them were as big as dining (table) sets,” he said.

Calleja said three Filipino guides from his firm and five foreigners had begun hiking up Mayon just a few hours before the eruption, which sent a thick column of ash 500 metres (1,600 feet) into the air.

Three Germans and one of the guides from his group were killed, while the Austrian woman suffered minor bruises, according to Calleja.

Calleja said the foreigners paid about $100 each for an overnight adventure on the 2,460-metre (8,070-foot) Mayon, which is famed for its near-perfect cone but has a long history of deadly eruptions.

A six-kilometre radius “permanent danger zone” is supposed to be enforced around the volcano. But Calleja said the local government allowed people to climb when there were no signs of an eruption.

“Between 300 and 1,000 climbers go here during the peak season from May to August,” Calleja said.

Volcanologists described the eruption as a 73-second “steam-driven minor explosion” that was not expected to be repeated anytime soon.

Chief state seismologist Renato Solidum said people living around Mayon did not need to evacuate. He said the explosion was triggered when rainwater made contact with hot ash deposits on the crater mouth.

“There is no magma activity. Essentially what happened today is a normal process of a steam-driven explosion,” Solidum told a news conference in Manila.

Residents in towns around the picturesque volcano said they were surprised by the sudden activity, which came as many were having breakfast.

“It was so sudden that many of us panicked,” said Jun Marana, a 46-year-old bus driver and father of two. “When we stepped out we saw this huge column against the blue sky.”

Marana said the ash column was dispersed by winds after about an hour, but said he was not taking his chances and was prepared to leave his home anytime.

Mayon, about 330 kilometres southeast of Manila, has erupted dozens of times in recorded history.

In 1814, more than 1,200 people were killed when lava flows buried the town of Cagsawa. In December 2009 tens of thousands of villagers were displaced when Mayon spewed ash and lava.

The volcano also erupted in August 2006. There were no direct deaths caused by the explosion, but the following December a passing typhoon unleashed an avalanche of volcanic mud from its slopes that killed 1,000 people.