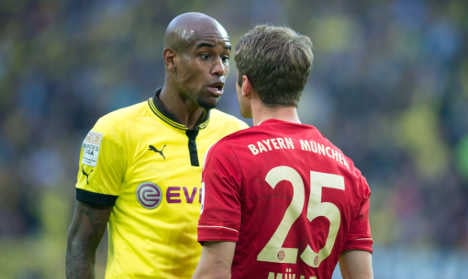 Bayern had already been crowned Bundesliga champions four weeks ago and the point guaranteed Dortmund second place, so Saturday’s German league clash at Signal Iduna Park was little more than a warm-up for the May 25 final.

But there was second-half drama as Bayern goalkeeper Manuel Neuer saved Robert Lewandowski’s penalty before Munich left-back Rafinha was shown a red card for elbowing Dortmund’s Jakub Blaszczykowski in the face.

“It will be an all together more explosive match in three weeks’ time,”

“Today’s game won’t be comparable with how things will be at Wembley.

“Unfortunately, we didn’t manage to win the game, despite a lot of chances.”

Dortmund ended Bayern’s 14-match winning streak in the Bundesliga as Munich dropped league points for the first time since December and coach Jupp Heynckes said the midweek Champions League win at Barcelona had taken its toll.

Bayern beat the Spaniards 3-0 for a 7-0 aggregate triumph.

“After the results of the last few weeks, it wasn’t easy to get back to business,” said the 67-year-old, whose side is bidding to become the first German team to win the European, league and cup treble.

“It was an intense game in which neither side gave anything away.

players were missing, but that wasn’t the case.

“I must praise the team, they fought hard, even with 10 men and they

Although Bayern beat Borussia 1-0 in the German Cup quarter-finals in February, the Bavarians have failed to beat their rivals in six Bundesliga attempts — their last league win was back in February 2010.

There is no love lost between the Bundesliga rivals and a heated argument between Bayern’s director of sport Matthias Sammer and Dortmund coach Jurgen Klopp broke out in the wake of Rafinha’s dismissal.

Referee Peter Gagelmann had to lecture the pair to restore order.

“No one came here thinking it would be a friendly,” said Klopp, whose side booked their Wembley berth with a 4-3 win on aggregate against Real Madrid in their Champions League semi-final.

“Sammer had said I should leave Rafinha alone, then I said something back,

before Mr Gagelmann ordered us to shake hands.

“It was a very intense game – everyone was still in tournament mode.

“We started very well, but there were too many moments where we played far

“We got a point, the point that we needed to make sure we finish second, so

we have reached a goal for the season.”