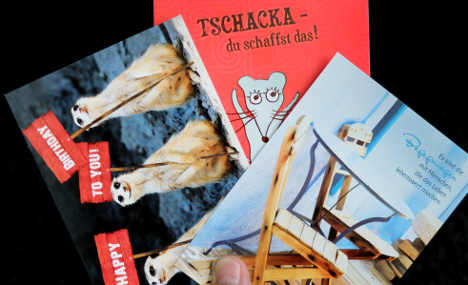 Research carried out by a Cologne-based business institute on behalf of stationery giant Paperworld revealed that Germans spent €149 million on greeting cards in the past year, up 6.4 percent on the year before. Amid a general slump in spending, sales had dropped by €30 million in 2010.

The German greeting card industry, which is dominated by small businesses, has an estimated annual turnover of €700 million.

“The classic card as an accompaniment to a present will continue to exist for a long time,” says Reinhard Becker, whose Bielefeld-based Grafik Werkstatt company specializes in cards and core gifts.

According to customer feedback, a significant number of the company’s mostly female customers are buying cards to build their own collections rather than to send. “Many people are buying cards for themselves,” says Becker. In a world where digital greetings are ten-a-penny, the classic card makes a “statement,” he says.

The family business, which began life in the 1980’s as a student project, now has an annual turnover of €10 million from greeting-card and postcard sales alone. The company employers 10 graphic designers as well as some freelancers, and develops 300 new cards every year. In 2012 it sold 17 million cards.

Becker’s biggest sales are in the “classic line” of cards, which feature nuggets of wisdom printed on a backdrop of nature scenes of pictures of animals.

Quotations such as “The journey doesn’t depend on which way the wind blows but on the direction you set your sail,” double up as daily mantras. Becker’s company intends on tapping into foreign markets in the coming years.

It’s not all rosy though. While greeting cards are still attracting sales, Becker is predicting the demise of the postcard. “People prefer to just send a quick snap on their smart phone,” he says.

Cards analysts say are under no threat from electronic media are those containing messages of condolence. “On such an occasion it is just not possible to send a text message or an email,” says Lippert. “One just needs a card.”