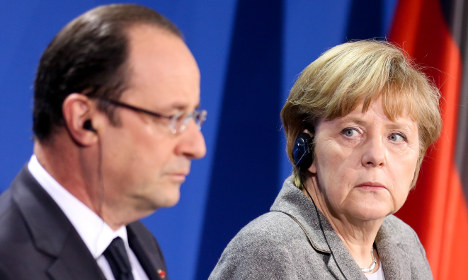 “German-French collaboration is, for us, essential. It comprises a very broad line-up of topics. For us it is of enormous importance,” government spokesman Steffen Seibert told a news conference when asked about the remarks.

Seibert pointed out that the remarks were made in a draft text for the Socialists’ party conference, adding: “As spokesman for the government, I don’t comment on statements by parties in other countries.”

“For us it’s not the parties that count, for us government action counts. The direct cooperation with the French president, with Prime Minister (Jean-Marc) Ayrault, with the ministers, counts,” he said.

“That looks quite different,” he added.

Germany and France may have different views on individual issues but “that is not so new”, Seibert said, stressing the EU’s two biggest economies were “completely different countries” with their own economic and political landscapes.

“But that hasn’t in recent decades and won’t in the future, prevent a close, friendly cooperation which is good for Germany, good for France and good for Europe,” he added.

In a draft document on Europe leaked on Friday, President Francois Hollande’s Socialist Party pilloried Merkel for being “selfish” in her drive for eurozone austerity to fight Europe’s debt crisis.

It also accused conservative Merkel, who faces elections on September 22, of being obsessed with “Berlin’s trade balance and her electoral future”.

Top French ministers warned Monday against picking a fight with Germany as a result, trying to rescue relations which have been described as at their lowest level in years.

No reason for fighting

“Debate yes, pugilism no. It is not normal to call into question such or such a leader,” Fabius said on Europe 1 radio. “There is no reason to face off one country against another.”

Senior Socialists have also recently called for a “confrontation” with Berlin to push France’s efforts to focus on economic growth measures over austerity.

But French Finance Minister Pierre Moscovici said attacks on Germany would do no good.

“This idea that there must be a ‘confrontation’ with Germany is wrong and completely counter-productive,” Moscovici told Le Monde newspaper.

“We cannot hope to move things forward through denunciation, stigmatisation or division,” he said, adding that such attitudes were “a certain way to doom us from the start”.

Prime Minister Jean-Marc Ayrault also insisted on “Franco-German friendship”, telling newspaper La Depeche du Midi that “like all friendships, it does not exclude debate on ideas.”

The leak follows months of sniping at Hollande from the Socialists’ left flank, who have accused him of not being forceful enough in his dealings with Merkel.

Hollande is suffering from record-low ratings in the polls about a year after coming to power, with some in his party saying the president has not done enough to push Socialist priorities.