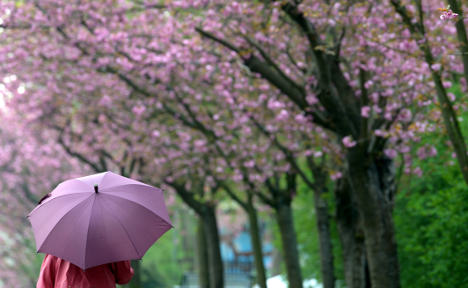 Friday started off with sun in the south and east of the country, but over the course of the day a low was expected to sweep in from the northwest, bringing showers, storms and changeable weather over the weekend.

The heavens will open in some areas in the west, dumping up to 25 mm of rain in just a few hours. In places the rain will come with storms while in others high winds will make it feel much chillier than the past few days.

Meanwhile, the south and east will cloud over, and by Friday evening party goers in the east may have to dodge isolated showers and the odd thunder storm, while heavy rain sweeps across the south west up to central hilly regions.

On Saturday, thick rain clouds will obscure skies from Saarland to Brandenburg, while later on the south east will be hit with more heavy rain and storms in places.

Meanwhile, the northwest and Baltic coast will see changeable weather, but right on the coast it is set to stay sunny and dry, said DWD.

It will feel noticeably chillier, with highs of between 7C and 12C on Saturday in the north. Only in the south east temperatures could push up to 13C to 20C degrees, and may even hit 24C in south east Bavaria.

Saturday night is set to be a washout for much of the south, with the heaviest showers set to batter the south east.

Meanwhile, the north west and north will stay clearer skies and mainly dry.

However, temperatures could sink to zero in some areas, and the north west may even see light frost.

Sunday will be brighter, with the north and north west staying dry and sunny. Elsewhere a mixture of sunny spells and clouds will give way to some rain in the evening in west and south west.

More stormy weather will hit the south and central areas on Monday, said the DWD, with the north and east seeing a return to longer sunnier spells.