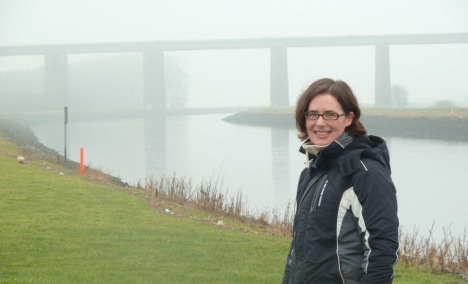 Rachel Ramsay is a British lecturer at the University of Oldenburg. The 34-year-old from Bristol has lived in Germany since October 2010.

What do you love about Oldenburg?

Oldenburg is a small, clean, pretty city – good for cycling and relatively quiet. If you want more life – bars and boutiques, hipster cafes etc., Bremen is half an hour away, and Hamburg around two hours by train.

Well, Shakespeare gave Bohemia a fictional coastline in The Winter’s Tale, and I would furnish Oldenburg with more hills.

Is the city friendly to foreigners?

In my experience, yes. I was warned about northern German reticence and aloofness by more than one Rhinelander before I moved here from Bonn, but I’ve yet to come across it.

What do you do on a typical weekend?

I don’t have much spare time at the moment due to work commitments, but I like going for a walk or occasionally a run in the Schlossgarten, admiring the city’s neo-classical architecture, looking around the shops in the city centre or going to one of the farmers’ markets, or just walking for miles down the River Hunte.

What do you miss about home?

Pies. No question. Working at the English department, there is no shortage of opportunities for me to speak the language; nowadays you can watch TV or listen to the radio online so it’s easy enough to keep up with developments back home – but I have never found a satisfactory pie substitute in Germany.

What is the food like in Oldenburg and where is your favourite hangout?

One of the things I like about Oldenburg is its proximity to the Netherlands, which means we have a few Dutch shops here – and Frizz Fritterie in the city centre, where you can get extremely tasty Dutch chips. I like going to the Havana bar/restaurant on Pferdemarkt to eat and drink, because the atmosphere is quite lively and you can get Haake-Beck Kräusen there; a cloudy lager.

What is the one thing that a tourist has to see there?

The Schlossgarten, an English-style Garden which was created in the early 1800s: tranquil and picturesque.