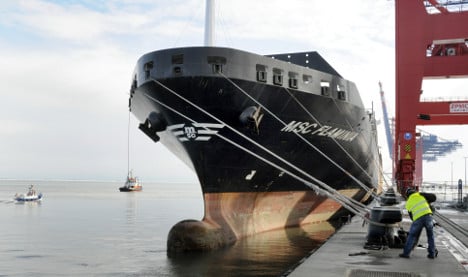 In a statement released late Monday, HSH Nordbank said that Navios and a number of its subsidiaries “will acquire a portfolio of ten vessels that are financed by HSH Nordbank.”

The portfolio comprises five tankers and five container vessels that belong to different owners but which are currently not employed or operate well below cost coverage and for which “continued financial and operational support from existing owners is not expected.”

“The total HSH Nordbank loan exposure for this portfolio amounts to approximately $300 million” (€231 million), the statement said. “Upon transferring the vessels to Navios, the current owners will be released from their respective credit obligations.”

In return, Navios would pay approximately $130 million to HSH Nordbank – around 40 percent of the outstanding loan amount – and secure continued operation of the vessels for at least six years.

The remaining $170 million of the loan amount would be converted into a participating loan held by HSH Nordbank, the statement continued.

HSH Nordbank chief Wolfgang Topp said the financing structure, drawn up in reaction to “the ongoing crisis in the international shipping industry … serves as a role model for the entire maritime cluster.”

It allows insolvent vessels, or those on the brink of insolvency, to be transferred to “a highly professional operator that is able to secure an economically feasible operation of the vessels throughout the shipping crisis.”

“In addition, there is a significant reduction of risk for the financing bank, while at the same time keeping the option to participate in a market recovery,” Topp explained.

HSH Nordbank, specialised in ship financing, is the last of Germany’s public-sector regional lenders still in trouble. Last year it sustained a net loss of €124 million.