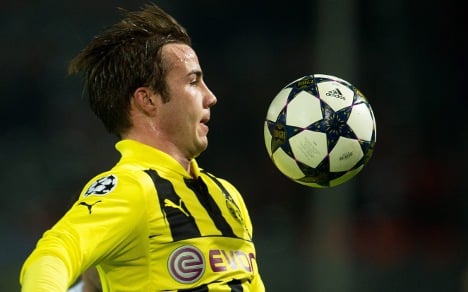 The 20-year-old attacking midfielder was under contract at Dortmund until 2016 but a release clause allows him to leave for that astronomical sum, according to German daily Bild.

Dortmund confirmed that Götze’s agent, Volker Struth, had recently informed them that Götze would be using the clause and will move to Bayern on July 1 – the first day ex-Barcelona manager Pep Guardiola takes charge as Munich coach.

The deal would make him the biggest transfer deal within Germany, passing the previous highest mark of €35 million which Bayern paid VfB Stuttgart for Mario Gomez in 2009. The €40 million Bayern paid Athletic Bilbao last year for Javi

According to Ruhr Valley newspaper, Ruhr Nachrichten, Götze will be paid

€12 million a year at Bayern. Götze is the first addition to the Bavarian club’s squad for next season, while Barcelona, Manchester City and Arsenal had all reportedly been interested in the young German.

“We are of course exceedingly disappointed but must stress that both Mario and his advisers have behaved with absolutely conformity within the contract,” said Dortmund chief executive Hans-Joachim Watzke.

The timing of the deal does little to help Dortmund, who host Real Madrid in the Champions League semi-final, first leg on Wednesday, but will boost Bayern, who are home to Barcelona on Tuesday in the other last-four clash.

Dortmund coach Jügen Klopp and director of sport Michael Zorc have asked Borussia fans to support Götze in his last four league games for the club he joined as an eight-year-old in 2001 and especially in the Champions League tie.

Götze is one of the rising stars of the Germany team, having made his debut as an 18-year-old in October 2010 and scored his first goal in an outstanding display on his first start in the 3-2 friendly win over Brazil in August 2011.

While his addition to the star-studded Bayern squad is sure to boost the Bavarian giants, Dortmund fans have already vented their anger and frustration on Götze’s Facebook page with “traitor” being one of the kinder comments. Dortmund also revealed they had no contact from Bayern in the matter.

Having won the German league title for the last two seasons, Dortmund have missed out to Bayern this season. Munich won the Bundesliga a fortnight ago with six games to spare and a 20-point lead.

Born in Bavaria, only 120 kilometres (75 miles) from Munich, Götze joined Dortmund in 2001 as an eight-year-old and made his Bundesliga debut in 2009, aged 17. His first appearance for Germany came in October 2010.

He has since made 22 appearances for Joachim Löw’s Germany and scored five goals, the first of which came on his first start in the 3-2 friendly win over Brazil in August 2011, when the then 19-year-old was outstanding.