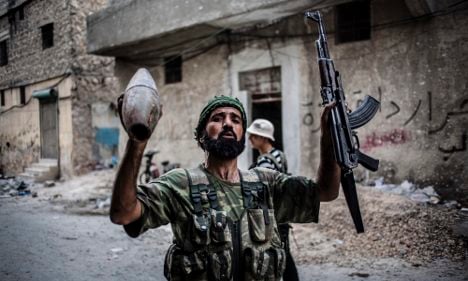 Germany up to now has opposed providing military support to Syria’s rebels, but Britain and France are pushing for the embargo to be allowed to expire at the end of May.

Speaking to journalists in Istanbul after a “Friends of Syria” meeting on Saturday, Westerwelle said the embargo would be discussed when EU foreign ministers meet in Luxembourg on Monday.

“If there are one or two countries in the European Union who think that there is no risk that arms will fall into the wrong hands,” then Germany “will have to respect that,” Westerwelle said.

The decision on whether to continue the embargo and sanctions on President Bashar al-Assad’s regime must be made unanimously by EU members. Monday’s

talks will also see EU ministers considering a case-by-case easing of an oil embargo against Syria to help the opposition.

Critics of supplying weapons to the rebels fear they will be acquired by radical Islamists. But supporters say arms supplies are needed to boost the standing of moderate groups and the opposition’s chances against Assad’s better-armed regime.

US Secretary of State John Kerry announced after Saturday’s talks that Washington was doubling its financial assistance to Syria’s opposition and would expand non-offensive military supplies to the rebels, but ignored calls for arms deliveries.

Westerwelle said the supply of body armour could be considered and welcomed a commitment from the opposition to protect minorities and distance itself from extremism.

“Therefore we are convinced that it makes sense to do more, to step up support for the opposition and that’s what we will do,” he said.

He also said Germany would boost its aid for Syria’s humanitarian crisis by €15 million euros to reach a total of €145 million euros.