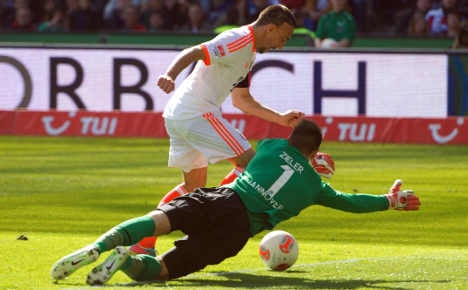 “We wanted to prepare well for the match against Barca, and we succeeded,” said Neuer, as only Andre Hoffmann’s late header for Hanover denied Bayern a Bundesliga record 20th clean sheet.

“We’ve played well, and especially in the first half, it was a convincing performance.”

Bayern are bidding to reach their third Champions League final in four years and for the second match running, they smashed six goals past hapless opponents.

The rout at Hanover followed on the heels of last Wednesday’s 6-1 drubbing of Wolfsburg in the German Cup semi-final.

Victory gave Bayern a Bundesliga-record 26th victory this season, a record ninth consecutive away win, while they also equalled Dortmund’s previous best of 81 points in a single season.

“Once again, the players have proved we don’t have a B-team, we only have an A-team,” said Heynckes, with his team bidding to become the first German side to win the treble of league, cup and European titles.

“The players are just enjoying their football, and our attitude is superb.

“Everyone was totally motivated, we put together some very fluid moves, we showed great discipline, and we created outstanding goals. “We laid the foundations for a big win in the first half.”

For the first time since the Champions League began in 1992, there are two German teams in the semi-finals with Borussia Dortmund hosting Real Madrid in Wednesday’s first-leg.

Dortmund warmed up for Jose Mourinho’s Real with a 2-0 win at home to Mainz 05 at their Signal Iduna Park stadium with Germany’s Marco Reus opening the scoring after just 32 seconds.

Poland striker Robert Lewandowski added a second three minutes from time to extend his record-breaking run having scored in each of his last 12 league games, which is a club record.

He is now only four short of Gerd Müller’s Bundesliga record of 22 goals in 16 consecutive league matches for Bayern Munich in the 1970s.

Dortmund coach Jurgen Klopp was delighted with his side’s final run out before Real arrive.

“We have seldom started a game as well as we did today,” said Klopp.

“The first 25 minutes with the opening goal were great.

“After that we lost our way a bit, but all in all it was the perfect day.”