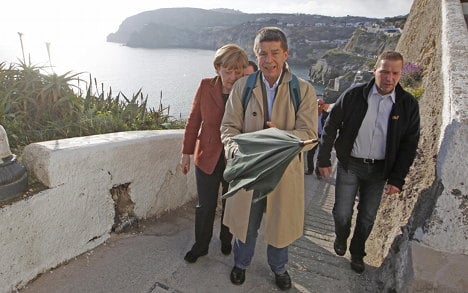 The photos were taken on the Italian island of Ischia, where Merkel and her husband Joachim Sauer have holidayed for the past ten years, and feature both of them in swimming gear, as well as Sauer’s children and grandchildren from a previous marriage.

Deputy cabinet spokesman Georg Streiter told a press conference in Berlin that all were taken without Merkel’s knowledge and published without permission and that it was well known she was not the type to pose for such images.

“They are all photos that were taken from some hiding place,” said Streiter. He added that the public should understand that it was not relaxing to be on holiday and “have the feeling that a camera lens was poking round every corner.”