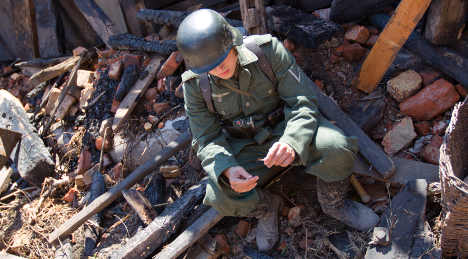 The €14 million ($18 million) production “Our Mothers, Our Fathers,” shown in three parts on public broadcaster ZDF, tells the story of five Germans in a story spanning the Nazis’ declaration of war on the Soviet Union in 1941 to their ultimate defeat in 1945.

Two are sent as fighters and another as a nurse to the eastern front while two others including a Jew destined for deportation by the Nazis initially remain in Berlin.

“The war will reveal what is worst in us,” Friedhelm, one of the soldiers, predicts.

In their Wehrmacht uniforms, the young men quickly become witnesses to SS atrocities committed in the occupied territories and eventually become implicated themselves.

One of the men is seen summarily executing a Russian POW on his superiors’ orders. The drama owes a debt to the US series “Band of Brothers” in its storytelling. But it portrays the era through the eyes of a German generation of perpetrators for the edification and entertainment of children and grandchildren, many of whom are still in the dark about what their elders did during the war.

More than 7.2 million Germans watched the first two parts of the prime-time programme, with 8.7 million tuning in for the finale — on a par with the ratings for the country’s favourite weekly crime show “Tatort.”

ZDF said it aimed to show the war in a new light in order to “foster dialogue between the generations.”

“If we can bridge this void of silence that exists in many families on the subject of World War II, then this film is a television event in the truest sense,” the broadcaster’s entertainment programming director, Heike Hempel, told the daily newspaper Frankfurter Rundschau.

The show, however, touched a nerve in neighbouring Poland, with Warsaw’s ambassador to Berlin, Jerzy Marganski, writing to ZDF this week to complain that his country’s resistance fighters and average citizens were portrayed as rabid anti- Semites “hardly distinguishable from the German Nazis.”

“The almost grotesque way in which the series presents the Home Army can create the impression that the guilt for the extermination of the Jews can be shared, that it must also be borne by other peoples,” he wrote.

“Such an understanding of the history of the 20th century would certainly not be helpful to the German-Polish historical dialogue.”

ZDF promptly expressed “deep regret” that the series had caused offence in Poland but dismissed the accusation that it was distorting history.

“In no way was the aim to relativise the historical facts or the Germans’ responsibility,” ZDF spokesman Peter Hill said.

Experts gave the miniseries mixed reviews. Martin Lücke of Berlin’s Free University said that the often melodramatic scenes carried the risk of viewers “identifying with the characters and looking for excuses for their crimes in the context.”

Political scientist Johannes Tuchel, who heads the German Resistance Memorial Centre, told Berlin’s daily Morgenpost it was “in principle always a good thing to show that the Second World War was a war of aggression launched by the Germans.”

But he said it was too soon to tell whether the film would launch a real debate in Germany along the lines of the groundbreaking 1978 miniseries “Holocaust” starring Meryl Streep and James Woods which opened many Germans’ eyes for the first time to the enormity of the Nazis’ crimes.