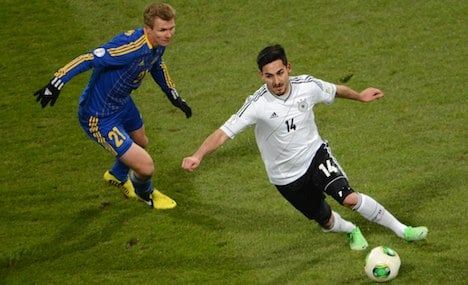 minute for the Germans, who also hit the woodwork six times in Nuremberg. Genrikh Shmidtgal scored the Kazakhs’ consolation.

“We dominated the game. Their goal was a bit unlucky but we invested a lot

in this game,” said Gündoğan. “It wasn’t easy against a team like Kazakhstan,

who defended so deep.”

Germany top Group C with 16 points from six matches, followed by Ireland with 10 points from five matches and Sweden with eight points from four qualifiers.

“Of course we let up a bit in the second half. We could have and maybe should have scored a couple more goals. But the game was already decided,” said Germany coach Joachim Löw, who once again used midfielder Götze up

Germany dominated play from the very start but Kazakhstan had the first chance as Sergey Ostapenko’s header from a corner went just past the post on eight minutes.

The hosts continued their onslaught with Gündoğan hammering a volley against the post in the 21st minute. A minute later Goetze struck the upright.

Germany finally hit the back of the net in the 23rd minute as Reus turned in from the left side and struck home a low shot from 21 yards.

The hosts doubled the advantage just four minutes later as captain Philipp Lahm slipped through the left side of the Kazakh defence before crossing for Gotze to net.

The barrage was continued in the 32nd minute as Gundogan was the beneficiary of Mesut Özil’s cross to the near post, where the Dortmund midfielder hit home his first goal for Germany.

Gündoğan was close to another goal nine minutes later but his attempt came off the crossbar.

Kazakhstan increased the pressure on the ball after the break and trimmed the deficit to 3-1 in the 46th minute due to a mistake by Germany ‘keeper Manuel Neuer, who mis-controlled a backpass, allowing Shmidtgal to race onto the ball and blast into the empty goal.

“I must apologise to the whole team. If that didn’t happen, it would have been a different game,” said a sheepish Neuer.

Germany nearly finished the game for good in the 72nd minute only to see Kazakh ‘keeper Andrey Sidelnikov save shots by Özil and Thomas Müller, with Özil and Sami Khedira both hitting the upright as well.

Four minutes later Sidelnikov batted Mueller’s looping shot off his own framework while Kazakhstan joined the post party as Valerij Korobkin hit the outside of the upright off a set piece in the 79th minute.

Lahm saved another Kazakhstan goal in the 89th minute, stopping Shmidtgal’s shot on the line before Reus finalised a counter attack in the 90th minute for his second goal.