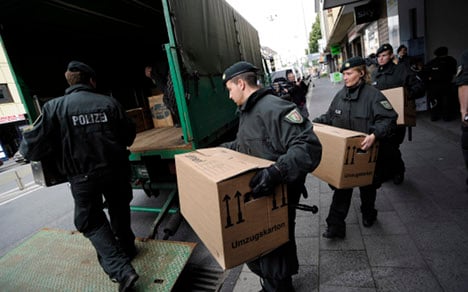 The country’s Interior Ministry confirmed that in North Rhine-Westphalia and Hesse alone, officers targeted 20 houses thought to belong to people connected to Salafist groups – a radical branch of Islam.

The targeted organisations are “DawaFFM” and “Islamische Audios”, as well as “An-Nussrah”, which had been part of the “Millatu Ibrahim” group that was banned in June 2012, a ministry statement said. All three were on Wednesday made illegal.

“Salafism, as it is represented by the groups banned today, is not compatible with our peaceful, democratic constitution,” he said.

He said the ban also served to protect the large number of peaceful Muslims. “They should not suffer from the conflicts which are deliberately provoked by extremists,” he said.

There were thought to be around 4,500 Salafists in Germany last year – up from the 3,800 estimated in 2011. This is a rise which has left security officials concerned.

Salafism is a religious, political Islamic movement in which its followers often reject the principles of liberal western democracy.