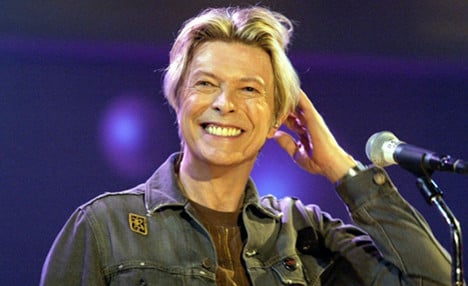 Bowie lived in the still war-ravaged, divided city for three years in the 1970s, when he was wearied by fame and trying to kick the drug and drink addictions that threatened to make him just another rock’n’roll casualty.

It was a fruitful time creatively, producing three albums including “Heroes”, whose cover art inspires the sleeve of the new record, “The Next Day”, which shows a theatrically posed black-and-white photo of Bowie obscured by a white square.

The singer eventually moved away, settling in New York with Somali-American supermodel Iman and their daughter.

But Berlin never quite forgot Bowie and his glamorous ghost still haunts the dreams of the hordes of expatriates who have flocked to the city since the fall of the Wall in 1989.

“Bowie affected the history of Berlin, just as much as Berlin affected Bowie,” said Mike West, 29, who leads tours to sites around town including Bowie’s former flat, the neighbouring gay bar where he had breakfast nearly every morning, and the Hansa Studios where he recorded.

“Berliners are very proud of Bowie, the fact that his best music came from while he was in Berlin.”

Nowhere was the shock of Bowie’s new single, released out of the blue on his 66th birthday on January 8, greater than in Berlin, which has responded with massive media coverage, themed club nights and a spike in interest in tours like West’s.

The moody new track entitled “Where Are We Now?” namechecks iconic sites throughout the city and came complete with a wistful video directed by American artist Tony Oursler.

Bowie is seen at the apartment where he lived in the Schoeneberg district of West Berlin, and passing remnants of the Wall, where a kissing couple inspired the “Heroes” single — still a Berlin anthem.

Bowie’s Berlin era, during which he spent much of his time with US rocker Iggy Pop, has also inspired a new film project, the British-German co-production “Lust for Life”.

Journalist Tobias Reuther, who wrote a 2008 book about Bowie in Berlin, said the city’s perpetual transformations appealed to a singer keen on reinvention.

“It was the mixture of going back to the 1920s which he has always been very fascinated by in terms of the arts and painting and at the same time he felt this is the place where the most interesting music is being produced,” he said.

“I always thought Bowie was the first to figure out that you could come to Berlin with its past and the strange situation that you have the ruins here and the new buildings there and vast amounts of space where you can create and find yourself.”

Bowie arrived in Berlin in 1976 skin-and-bones, a broke superstar who had become a slave to cocaine and liquor.

“I spent most of my time with Iggy and basically we tried to get away from the state we were in when we lived in the US,” Bowie told the Berlin daily Tagesspiegel in 2002 in a rare interview about his time in the city.

He said Pop, real name James Osterberg, was wont to raid his refrigerator for the delicacies he picked up at the posh KaDeWe department store, and accompanied him on endless nights at the fabled Dschungel bar, which is now the site of an upscale hotel.

Bowie said he took inspiration from all the glory and horror the city had to offer: the Nazi past, East-West hostility, its museums’ Expressionist masterpieces, Bertolt Brecht plays and the budding electronic music scene.

“I couldn’t have made the music I did then if I hadn’t been completely taken with Berlin, with its special structures and its tensions… the Wall and its impact on the city,” he said.

Asked if he would encourage young artists to follow in his Berlin footsteps now, Bowie demurred.

“I always tell them that’s over. You can’t repeat the past. Maybe you’ll experience something else that’s great. But it will never be like what I felt,” he said.

Ruether said that Bowie’s apparent nostalgia for Berlin was linked to the creative heyday he had in the city.

“I think Bowie feels very strongly that his Berlin period was probably his best and his most creative – that was just an extraordinary move that he made way back then, to live in Los Angeles and decide to move back to Europe but not to London, to this strange West Berlin island,” he said.

“He always said ‘I never felt freer than I did in Berlin’.”