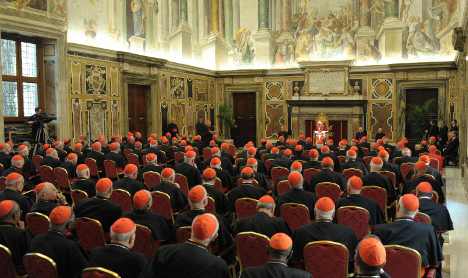 The imposter, who specializes in ecclesiastical disguises, introduced himself as “Basilius,” and mingled with priests and cardinals gathered in the Holy City.

Before he was discovered, the man reportedly proclaimed that Catholic bishops had not dealt adequately with priests accused of child abuse.

“Basilius,” whose real name is Ralph Napierski, managed to fool many, including cardinal Sergio Sebiastiana with whom he posed for a photograph. But keener observers noticed that he was wearing an unusually short cassock and a purple shawl rather than the trademark sash, as well as sporting a ring on the wrong finger.

Matthias Kopp, spokesman of the German Bishops’ Conference told the Bild newspaper that the man was not listed in the Annuario Pontificio, the Pontifical Yearbook.

“The man only made himself a laughing stock worldwide,” Stefan Förner, spokesman for the Berlin archdiocese said on Tuesday. The Church will not however be pursuing legal action against him as the title of bishop is not a legally protected term.

Napierski has a history of dressing up as church personalities. He claims to be part of an order in Berlin known as “Corpus Dei,” as well as the “Independent Catholic Mission.”