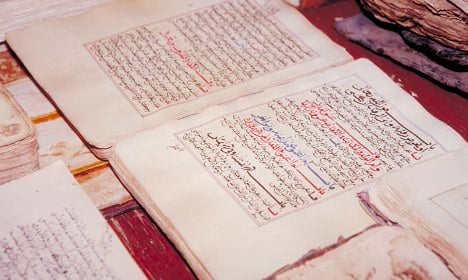 Embassy staff supported Malian academic Abdel Kader Haidara in his bid to save 200,000 irreplacable African and Arabic manuscripts – some of which are over 800 years old – from Timbuktu’s Ahmed Baba Institute Library before it was burned down in January by Islamist insurgents, the German Foreign Office said.

German staff paid for petrol and provided archive boxes for the operation led by Malian academics, which succeeded in smuggling around 80 percent of the valuable historical manuscripts to safety, wrote Der Spiegel news magazine in a report out on Monday.

Many initially believed the manuscripts had been destroyed when North Malian rebel fighters torched two buildings that had housed the documents as they were forced out of the city by French and Malian government troops on January 28th.

Many documents – key philosophical, early scientific and religious scripts dating from between the 9th and the 16th centuries when Timbuktu was a hub of Islamic culture – were hidden in boxes in private cars, sometimes disguised under lettuces and fruit, and driven to the Malian capital Bamako, wrote Der Spiegel.

German Foreign Minister Guido Westerwelle said Germany will continue to support Malian academics in their bid to preserve their cultural heritage during and after the current conflict.

“I’m pleased that a large part of this valuable cultural treasure could be secured with German help,” said Westerwelle in a statement. “We are ready to provide active support with the reconstruction of the library in Timbuktu,” he added.