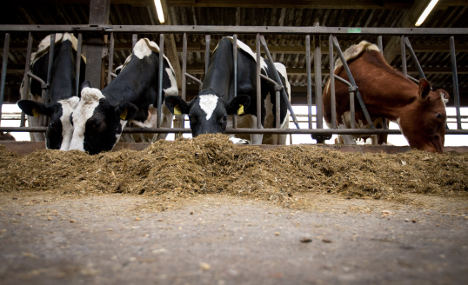 Fears were raised on Friday when it emerged thousands of farms had been feeding livestock feed containing 30 times the acceptable limit of the cancer-causing substance aflatoxin.

The source was traced back to 10,000 tonnes of a Serbian shipment of contaminated maize which found its way into animal feed delivered to 3,560 farms in Lower Saxony, including 938 dairy farms, the state’s Agriculture Ministry said on Friday.

Aflatoxin is produced by the Aspergillus species of mould which can develop when food is stored in warm and damp conditions.

Milk from cows which have ingested aflatoxin – one of the strongest naturally-occurring carcinogens – is “particularly dangerous,” said Udo Paschedag, state secretary of the ministry on Friday.

The poisonous feed was also delivered to non-dairy farms in North Rhine-Westphalia and used in compound feed sent to Saxony, Brandenburg, Schleswig-Holstein, Mecklenburg-Western Pomerania and Saxony Anhalt. The carcinogen was also detected in feed in Rhineland Palatinate on Saturday – but authorities could not yet say whether it originated from the same Serbian shipment of maize.

However meat and eggs from the thousands of chickens, pigs and cows also fed the contaminated feed poses little risk to human health, said Paschedag.

“We assume the milk is ok,” he said and pointed to quality control checks carried out by milk producers.

But criticism grew over the weekend as the scale of the contamination became known. Either the manufacturers had failed to detect the contaminated maize, or they “had consciously accepted the health risk for consumers,” Renate Künast, head of the Green party parliamentary faction told the regional Neue Osnabrücker Zeitung newspaper on Saturday.

Paschedag blamed feed manufacturers for choosing “cheap” ingredients and questioned the standards of the food quality control system. This is not the first time aflatoxin had made its way into animal feed – the German Minstry for Agriculture issued warnings to that effect last October, he said.