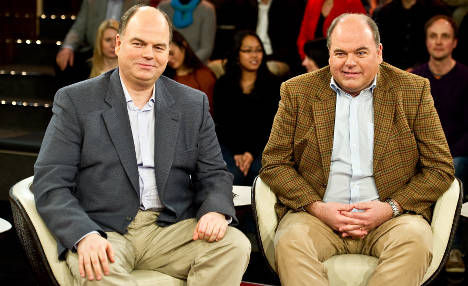 Kohl, a giant of European politics who oversaw crucial parts of European Union development as well as German reunification during his 16 years as chancellor, has become increasingly isolated while under the influence of his much younger wife, the two sons claim.

Walter and Peter Kohl were on a major television talk show on Thursday evening, promoting the new version of a book co-written by Peter about their mother Hannelore – released this week to mark what would have been her 80th birthday. She killed herself in 2001 after suffering a severe light allergy for years, which forced her to spend most of her time at home in the dark.

Her last instruction to the boys was said to have been for them to make it up with their father, but this seems less likely than ever. On Thursday they took to national television to criticize their mother’s successor at the side of their father – Maike Kohl-Richter, Kohl’s 49-year-old second wife. Peter Kohl even suggested that before their marriage, she had collected Kohl pictures and memorabilia like a stalker.

Allegations have long been made that she jealously controls and limits access to the 82-year-old former chancellor, who is no longer able to walk or clearly speak after a serious fall in 2008.

Peter had to gather himself when talking about the last time he saw his father – he had visited him with his own daughter in 2011, Der Spiegel reported on Friday. Helmut Kohl had been really pleased to see them, but had then indicated they should leave “Otherwise there will be a huge problem again.”

Peter Kohl also spoke to this week’s Bunte magazine of a contact ban imposed by Kohl-Richter, who, he said, also controlled who speaks with Kohl, what letters he saw – and added that the two sons had been removed from a police list of approved visitors.

Kohl-Richter had also stopped her husband’s contact with his ghost-writer Heribert Schwan, Peter Kohl told the magazine – and this was problematic due to the more than 600 hours of interviews with the former chancellor that Schwan has, and the many confidential files.

“My father cannot, for health reasons, control it all, and Mrs Kohl-Richter has obviously completely lost the overview of where which files and documents are,” he told the magazine.

“For my father this is all unbelievably damaging and reprehensible,” Peter said. “I find her responsible for all of this damage. One cannot deal with the intellectual heritage of my father like this.”

His book also alleges that Kohl had started an affair with his future second wife back in the 1990s when she worked at his chancellery. Walter Kohl said he had heard this from a close friend of his father in 2005.

“Every conversation [with her] was a hymn of praise about my father,” Peter said of of Kohl-Richter during Thursday night’s talk show.

He said her pre-marriage flat in Berlin was full of pictures and souvenirs of Helmut Kohl, which had made him think of “a propaganda film about my father.”

“I was in some kind of private Helmut Kohl museum. There was Helmut Kohl photography standing or hanging wherever you looked,” Peter wrote in his book, according to Die Welt newspaper.

The flat had shown signs of what he called “years of careful collection to serve a hero-worship… as one might know from reports about stalkers.”

All this public animosity was designed, both sons insisted, to honour the memory of their mother.

“This evening is, if you like, a demonstration, without flags or banners, for Hannelore Kohl,” said Walter.